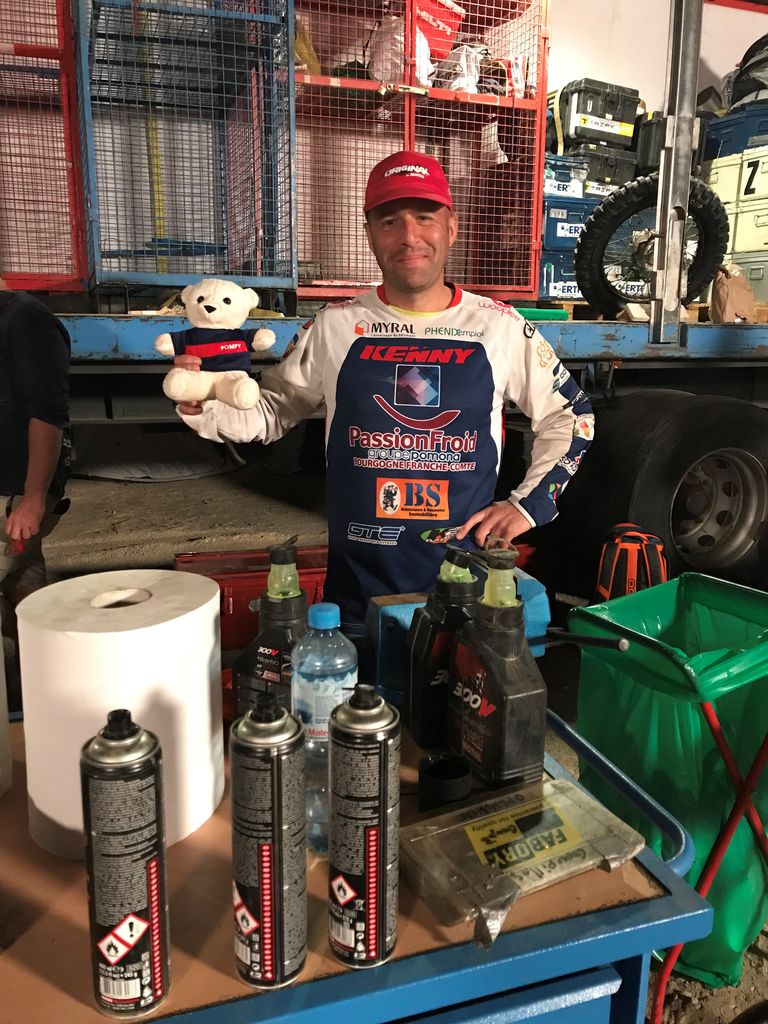 WHY THE DAKAR? WHY NOW?

"Actually the Dakar is my childhood dream. I have been raised on motocross fields as my dad was a motocross rider. Of course I started racing in motocross as well when I was a kid, then I moved to enduro… Why now? It costs money to participate to the Dakar and of course when you build your life with your family, there are other priorities. I am 45 years old now, good with my life, and I felt that it was now or never. So for the past years I have been training, attending the Morrocco Rally in 2015 for instance and the Rally World Championship in 2016, raising a budget and here I am, attending the 2018 Dakar!"

WHY DID YOU DECIDE TO BECOME AN ORIGINAL BY MOTUL RIDER? IS IT A QUESTION OF BUDGET?

"Of course budget was part of the decision, but to be honest, I think the Original by Motul category would have been the right one to me anyway. When people trust you with their money in your project, you have to make decisions, and it is hard to decide which is the proper team to give this money to, to help you in your project. Also, I cannot just lie there doing nothing, so it would have been too complicated to watch someone working on my bike. I need to be in charge, to know everything that is being done on my bike. Also, the Original by Motul category is just like a family. We are helping each other, sharing experiences… I really would not change that!"

CAN YOU TELL US MORE ABOUT POMPY, THE TEDDYBEAR DRESSED AS A FIREFIGHTER THAT WAS RIDING YOUR BIKE WITH YOU?

"I have been a professional firefighter for all my life in France. During our many interventions (fires, road accidents, bad treatments…) we noticed that sometimes it is really hard to get a child to trust us and talk to us to explain if he feels pain and where. However, when implying Pompy the teddybear, the children often start to open up. If they are not talking to us, they are talking to Pompy, showing on him where it hurts on them. It helps of course as well to give them comfort in very hard times. So Pompy really is a tool for firemen, and emergency staff. I am involved in this project with the Fédération Nationale des Pompiers de France (National French Federation of Firefighters), we found teddybears that are safe for children from their birth, and every year, I promise an objective of Pompys that I would give to my department (Côte d’Or), which I did for the last three years. Indeed in 2015 I attended the Rallye du Maroc, and I raised money to buy 350 pompys, in 2016 I did the Rally World Championship, and I raised enough money to give 750 pompys and for the Dakar I managed to raise enough money to give 1100 Pompys to the firemen of my department to help them work. When I raise money for my races, I always give people the possibility to only give money for Pompy and not for the race, as my aim is before everything to raise awareness around this action and find more people and companies willing to finance more Pompys for firemen all around France."

UNFORTUNATELY YOUR DAKAR STOPPED TOO SOON DURING STAGE 2 WHEN YOUR BIKE STOPPED WORKING IN THE MIDDLE OF THE DUNES. WHAT DID THIS DAKAR BRING TO YOU?

"Frustration of course. A lot of frustration. It was hard raising the money, and I did everything I could to reach the end: I trained a lot, I prepared the bike the best I could and took very good care of it. Unfortunately that is the race and there is nothing we can do about it. But the Dakar will also have been a nice human adventure. I got to know very nice people, and as you can see even if my adventure stopped yesterday, I am still here. I would like to keep following the Dakar until Cordoba, and help my friends and Mathieu (the Original by Motul category manager) on the Original by Motul bivouac every night."

WHAT WILL BE POMPY’S NEXT RACE?

"Hard to say right now... It might be the Merzouga rally in 2019, as it could be again the Dakar with one of my sponsors that is very enthusiastic in having a team for next year with me of course… but right now it’s to early to tell. If I listened to my heart of course I will be on another race in 3 months, but I have a family to think about and I don’t want to rush any decision."