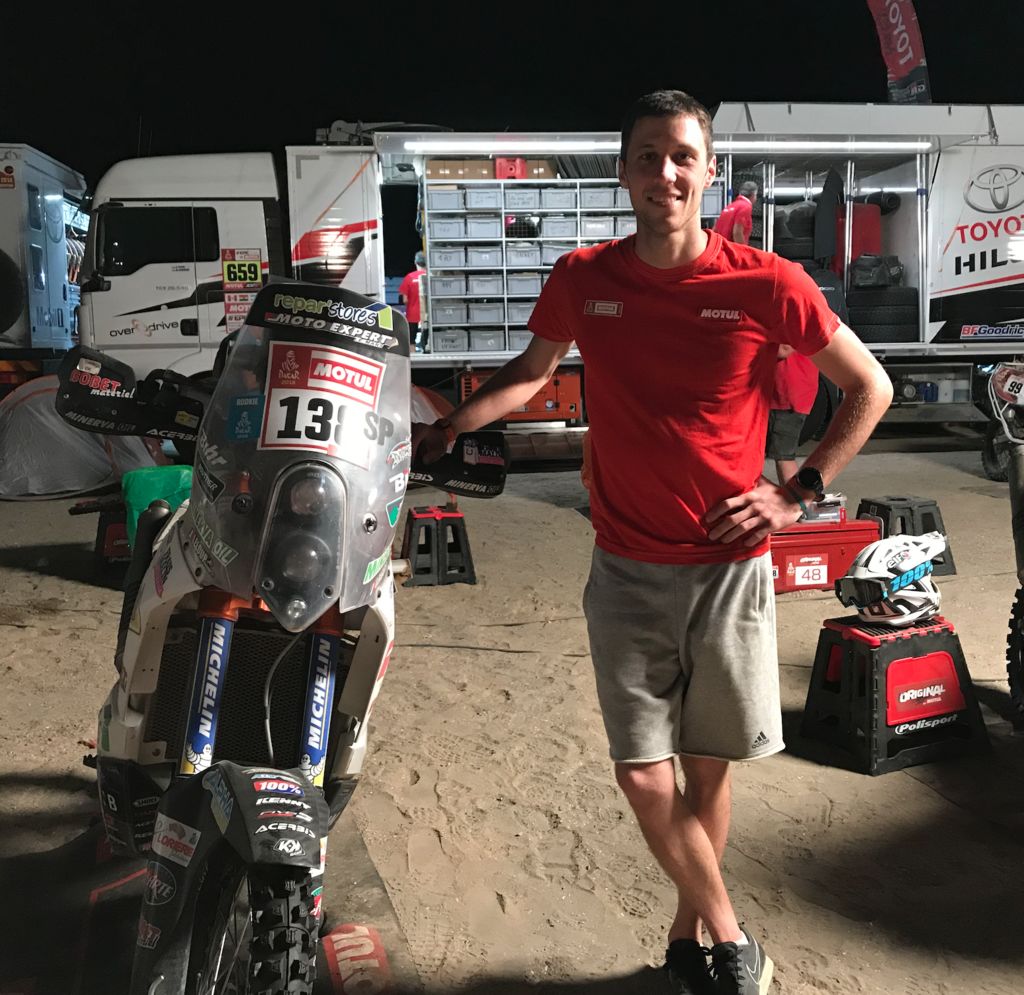 THE DAKAR IS A FAMILY BUSINESS FOR THE LELOUP'S RIGHT?

"Yes indeed, actually my father and my uncle participated in 6 Dakar's in total: 4 for my uncle and 2 for my dad. For most of them, they had assistance, but my dad did it once as a Malles Moto. When I reached 18, my aim was to enter the Dakar, and be the youngest rider to participate in a Dakar. Unfortunately gathering the money and the regulations made it complicated. I am now 25 years-old and over the past years this project grew more and more in my head, and after attending the Sardinia Rally (a stage of the World Championship) last year, it became a concrete project in my head. My family is very supportive of my project and they are all waiting for my calls every time I come back to the bivouac to tell her how my day was. It reminds them of the past."

TELL US HOW DID YOU MANAGE TO GATHER YOUR BUDGET FOR THE 2018 DAKAR?

"As a lot of rider will know, gathering a budget is not easy, and sometimes you have to be more ingenious to find the money. One day someone mentioned preparing and selling a scrambler bike to get money, so I decided to do so. I worked days and nights on this bike, and sold it during a tombola, thus gathering 6000€. This project took a lot of time in an already busy period (I started my own company in January 2017), it also allowed to increase awareness about my project to Dakar, and attract some sponsors. In the end, I started looking for budget in March 2017 and despite the fact that it was not easy being on all fronts with my new business, the scrambler, preparing the bike for the Dakar and find the budget, I did it and here I am!"

HOW DID YOU PREPARE FOR THE DAKAR?

"The first preparation people think about is the physical preparation. I trained for the last month, doing sport in the morning before going to work. I may not have trained enough but so far, I am satisfied as I am not tired, I don’t feel pain in my legs…just the hands but this is unavoidable. Then I also had to train to be an Original by Motul pilot. Indeed when you have no assistance at all, you’d better know what you have to do on your bike! I have been riding from my youngest age: trial, motocross, enduro, super endure (in the World Championship), and then rally, and all this time I have learnt to do the mechanics on my bikes all by myself (with tips from my dad of course). So for this Dakar I prepared my bike, overhauled the engine, all by myself. This allowed me to be ready to work by myself every night on my bike in the bivouacs. In terms of rallys, I only did the Rallye du Maroc in 2015, and the Sardinia Rally in 2016 before this Dakar!"

WHAT IS THE HARDEST CHALLENGE AS AN ORIGINAL BY MOTUL PILOT?

"Having no assistance. Some of the Original by Motul riders are really fast and we can fight with “normal” riders, while we have a double challenge. When we arrive in the bivouac, the day is not over and there is no rest for us. We have to get working on our bikes straight away, in order to finish as early as possible and not go to bed too late as we have very early starts. In order to be as efficient as possible, you have to be organized, and get everything prepared beforehand. For instance most of us took 6 air filters with us so we don’t have to take off, clean, dry and put back the one we just used. In La Paz during the rest day we will have time to wash them properly and be ready for the second part of the rally! In the end, it is hard but I love being an Original by Motul and even with more budget I would have particpated in this category anyway!"

WHAT IS YOUR NEXT CHALLENGE?

"I am not sure yet but maybe a semi-marathon or a marathon when I’ll be back in France after the Dakar!"