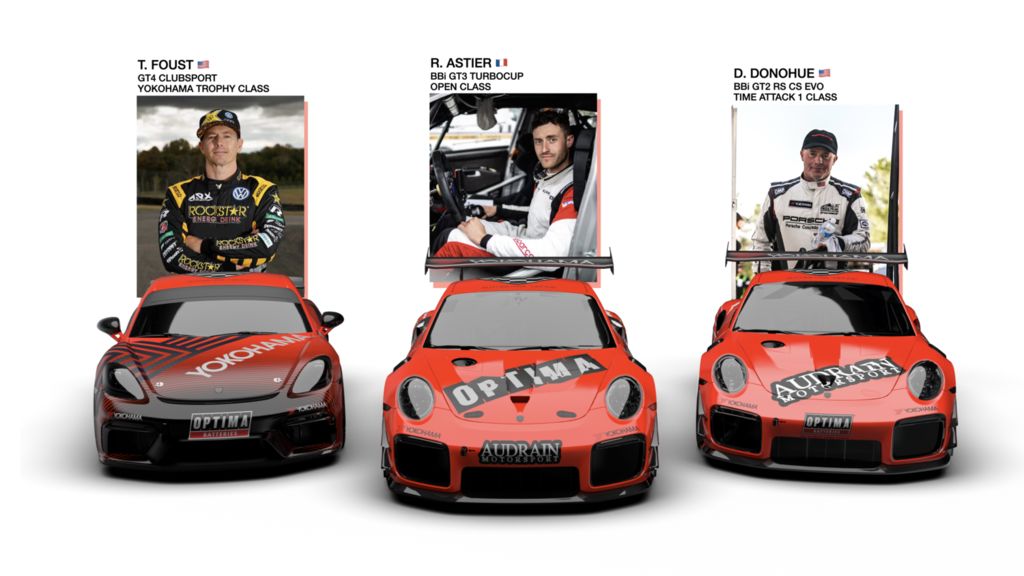 BBi Autosport returns to Pikes Peak for the 99th running of America’s second oldest race, the Pikes Peak International Hillclimb, June 27, 2021 – known as ‘The Race to the Clouds’ and regarded as one of the most famous and arduous racing events in the Rockies and the world. For this year’s 2021 effort, BBi returns to ‘The Mountain” with three Porsche race cars utilizing BBi’s impressive and updated aerodynamics within three racing classes: Open Class, Time Attack 1 and The Porsche Pikes Peak Trophy class by Yokohama.

“We have learned so much from our own past experiences competing at the PPIHC and to apply those learnings on three diverse Porsche platforms takes it all to a new level” says Betim Berisha, Owner of BBi Autosport.

“Pikes Peak is a part of history that annually brings out the most fearless competitors in the world to race on some of the most grueling environmental conditions imaginable – and in some of the most technologically advanced vehicles to date,” said Berisha.  “Our participation not only fulfills our passion for racing, but places us among the very best of the best.  Our team and our highly tuned Porsches are testing applications that can later benefit fellow enthusiasts as we apply them to everyday operations, development and advancements for our clients.”

“Lucy,” the OPTIMA Batteries Porsche GT3 “TurboCup” which set the TA1 record in 2019 is back again, this time in the Open Class and is once again being piloted by French Rally Car Driver, Raphael Astier. To remain competitive, BBi has improved the OPTIMA “Turbocup” from its 2019 with all-new and larger Garrett Turbochargers and JRZ fully active dampers – among other updates, the vehicle will find quicker speeds in the fast lower section of the course, while better accommodating the bumps on the mountain’s top side.

Champion Racing Driver and former Rolex 24-hour GX Class Winner David Donohue returns for another attempt in “Sunny” the Audrain Motorsport GT2 RS Clubsport after an incomplete run in 2020. Learnings from the 2020 effort have allowed BBi’s team to improve speed and bring more advanced technology to the updated 2021 BBiEVO variant of the GT2 RS Clubsport, through updated aerodynamics, active JRZ dampers and use of a full BBi’s titanium 3-D printed exhaust. The Audrain Motorsport GT2 RS once again runs in the highly competitive “Time Attack 1” class.

Professional racing driver and stunt driver Tanner Foust will be piloting the OPTIMA Yokohama Porsche GT4 Clubsport in the Porsche Trophy Class by Yokohama. Based on spec class rulings few updates can be provided on the GT4, however the vehicle does utilize updated JRZ active dampers, allowing Foust, a four-time entrant, to remain competitive. Foust’s experience at Pikes Peak began many years prior, racing before the course was even fully paved. For 2021, BBi has partnered with Porsche Motorsport North America to support Foust.

All three cars are supported by Yokohama and are equipped with the ADVAN A005 slicks on the TurboCup and GT2 RS CS and A052 tires on the GT4.

BBi will be the first to demonstrate the new proactive damper technology from Suspension Research Innovations and JRZ, outfitting all three race cars with the new dampers.

Aerosim-Research along with Verus Engineering have been key in finding downforce and reducing drag though aerodynamic studies and part development.

The team at Oilstain Lab has been leading the creative on livery development for all three race cars.

As the BBI Autosport Team at Pikes Peak makes its mark on ‘The Mountain,’ for 2021 the team will also be gaining additional recognition by raising awareness and funds for two meaningful charitable causes, benefitting local organizations for Ewing’s Sarcoma and Parkinson’s Disease, through BBi’s support for two nationally recognized foundations: THE LITTLE WARRIOR FOUNDATION and DRIVE TOWARD A CURE.

BBi is joining The Little Warrior Foundation to help raise awareness, funding and finding cures for childhood cancers, with a specific focus on Ewing’s Sarcoma. The organization funds projects and research that have high potential for saving kids’ lives. Lucy Spada is one of many kids affected by this cancer and BBi is dedicating “Lucy” the OPTIMA GT3 TurboCup and the other two race cars in the lineup to putting a spotlight on the cause. For more information, view: http://www.little-warrior.org

Additional funding will be provided to non-profit Drive Toward a Cure, a 501(c)3 organization that raises funds and awareness for Parkinson’s Disease research AND patient care. Inspired by the camaraderie found within the automotive culture, the Foundation’s mission benefits equally from both enthusiast communities and industry professionals and since 2016 has raised more than a half million dollars including contributions that benefit various Parkinson’s Foundation Centers of Excellence on local, regional, and national levels through Drive Toward a Cure’s “Access to Care” program. 100% of BBI’s contributions to Drive Toward a Cure will benefit the University of Colorado Movement Disorders Center located in Aurora, located on the campus of the largest health center in the Rocky Mountain Region. For more information view: www.drivetowardacure.org

Raphael Astier --French rally car driver Astier holds a number of Championship wins in the French Rally Cup, WRC3 and FIA RGT Rally. Astier has raced for more than a decade with impressive finishes and class wins worldwide and this year will mark his fourth race at Pikes Peak, including a 2019, TA1 record set while piloting the OPTIMA GT3 TurboCup.

David Donohue – Firmly established as a champion racing driver with an impressive resume that includes Touring Cars, Prototypes, NASCAR Stock Car and Craftsman Truck Series, Donohue was an integral part of the Brumos Racing family, driving a Brumos Racing Daytona Prototype in every Rolex Sports Car series race from 2003 through 2010. In 2009 he co-drove to victory in the Rolex 24 at Daytona. Donohue and co-driver Darren Law joined Action Express Racing in 2011, sharing three podium finishes and 3rd place finish in DP driver points and later returned to Action Express Racing in 2012 with an all-new Corvette Daytona Prototype finishing 4th in points. Donohue was the 2013 Rolex-24 Hour GX class winner in Napleton Racing’s Porsche Cayman.

Foust is the first American driver to win a round of the European Rallycross Championship and finished both 2011 and 2012 ranked in the top three. In North America, Foust has been a dominant rallycross driver since the sport of rallycross was first introduced to the United States in 2010. His varied race experience includes multiple years of open wheel competition, the Pikes Peak Hill Climb, rally racing, various types of sports car racing and the SCORE Baja. He has represented the USA in the annual Race of Champions three times (2010, 2009, 2008).

Audrain Motorsport is a carefully curated assortment of immersive automotive experiences for the enthusiast, sharing extraordinary experiences centered around the way enthuisasts want to engage with cars and motorcycles. No matter where one’s passion connects, on a tour, rally or back country drive; exploring the limits of an owner’s car and talent against the clock on a track; as an insider at the world’s leading Concours d’Elegance and historic races; or sharing conversation with the movers, shakers and legends of the motoring world in an intimate setting, Audrain’s is here to make it possible.

With a 40-year history of technological innovation and engineering, OPTIMA® products offer unstoppable power for extreme enthusiasts and others who require THE ULTIMATE POWER SOURCE. In the 1970s, OPTIMA Batteries introduced the first maintenance-free lead acid batteries for commercial and military use and the first high‐performance AGM automotive batteries. OPTIMA revolutionized the industry with the introduction of its unique SPIRALCELL TECHNOLOGY® as well as developing its first digital battery charger and maintainer.

Yokohama Tire Corporation is the North American manufacturing and marketing arm of Tokyo, Japan-based The Yokohama Rubber Co., Ltd. Since expanding to the United States in 1969, they have been an industry leader in tire technology and innovation across the globe.  All three BBi Porsche race vehicles are running on Yokohama tires this year. The OPTIMA GT3 TurboCup and Audrain GT2 RS Clubsport on ADVAN A005 race slicks and Tanner’s GT4 is on the ADVAN A052 tires. Yokohama is providing critical technical support to keep the cars at peak performance when it comes to grip and safety.

The Pikes Peak race and experience has captivated the team since the first race effort with Jeff Zwart in 2013, running the Porsche 997 “TurboCup”. This is one of the hardest events to prepare for given the unpredictable and brutal nature of the environment, limited access, and complexity of the racecourse. Taking on the diverse challenges is what has been so intriguing for the team along with the general Pikes Peak sportsmanship and “family” of racers, teams, and supporters. So many come together from across the world as there is no other race like the “Race to the Clouds” at Pikes Peak. BBi Partners for the 2021 Pikes Peak International Hillclimb