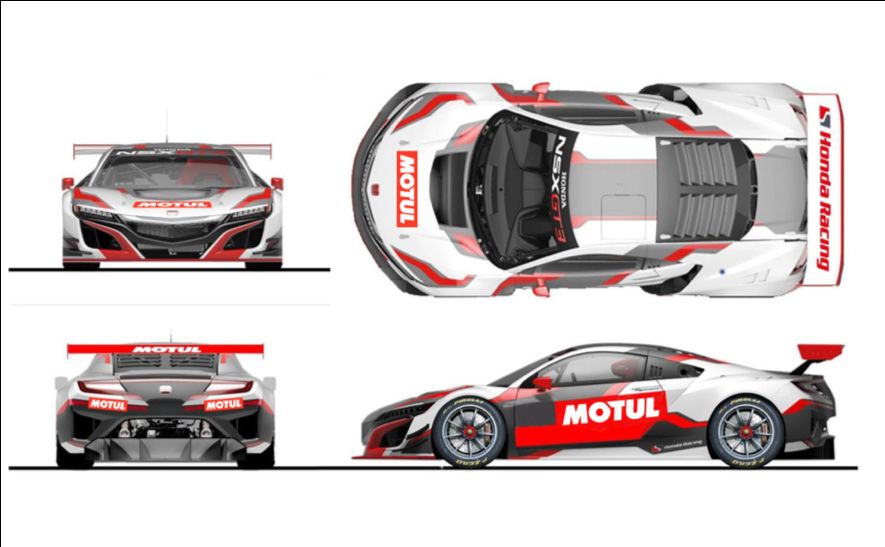 The Suzuka 10 Hours will take place between 24-26th August and a high-profile entry is today announced! Motul will form the “Honda Team Motul” to enter a Honda NSX GT3 in the endurance race.

Developed by Honda R & D, JAS Motorsport and Honda Performance Development, the NSX GT3 is a proven race-winning machine at the highest level of GT3 competition.

The entry will be in excellent hands with a young and talented driver line up which is made up of Naoki Yamamoto, the 2013 winner of the Super Formula series and a current GT500 competitor in Super GT, Daisuke Nakajima, younger son of former F1 driver Mr Satoru Nakajima and a Super GT driver with Team Mugen, plus his current team mate and former IndyCar driver, Hideki Muto. The team will be managed by well-known endurance and Super GT driver Shinji Nakano, and an initial test session will take place at Suzuka on 23rd June.

Motul’s Managing Director Arnaud Laire said of the new project: “We are happy to enter this new challenge alongside our partner Honda, with whom we have been collaborating for years – an association which has reached new levels since the opening of Motul’s Japanese R&D Centre in Kawasaki last February.  It is in this laboratory that Motul’s experts work on experimental products as well as the 300V Motorsport Line which has proven to be so successful in all forms of motorsport, and which is the foundation of our development of products of excellence for our consumers.”

Mr Masashi Yamamoto, General Manager of Honda’s Motorsports Division commented: “I feel honoured that Motul has chosen Honda NSX GT3 with which to enter the Suzuka 10 hours endurance race. Our experienced drivers coming from SUPER GT are familiar with the Suzuka circuit and I am therefore looking forward to the high performance of the team during the race.”