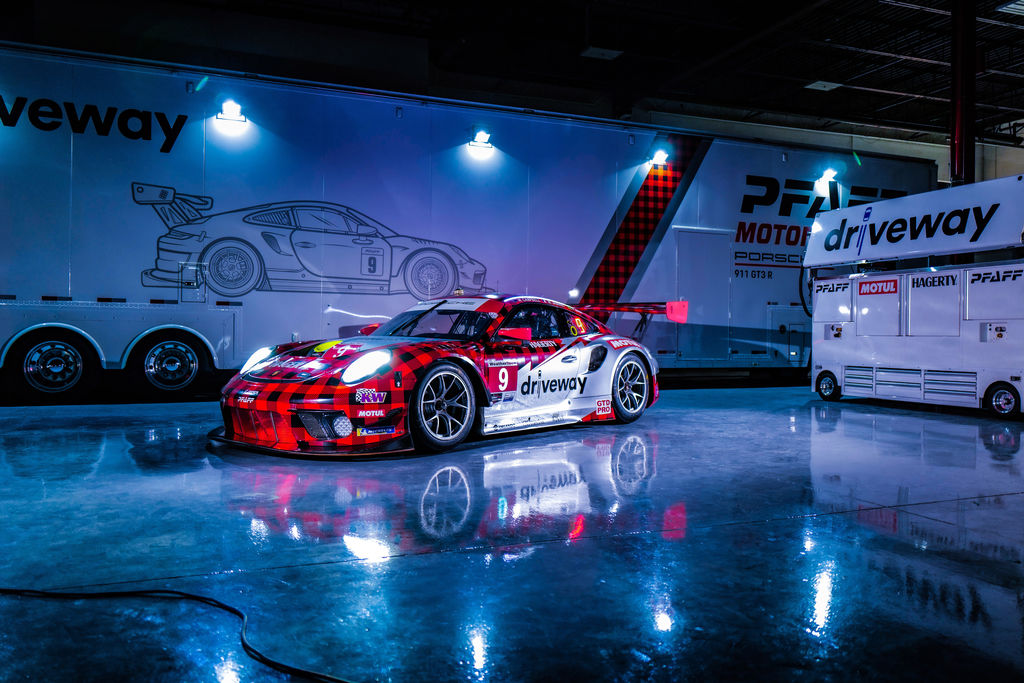 LAD’s online platform – Driveway.com – offers consumers across the United States the ability to buy, sell and service their vehicle from the convenience of their own home. Unique in the industry, Driveway.com offers online purchasing and quick online financing from 24 lender partners for both new and used cars. Consumers can complete the purchase of a new or used vehicle online and have the vehicle delivered directly to their driveway.

This announcement comes off a string of successes for Pfaff Motorsports. The team won the 2021 WeatherTech Championship GTD title and started its 2022 campaign with a dramatic victory at the 24 Hours of Daytona in January. The team has finished on the podium the last six races in a row of IMSA competition and enter the 2022 12 Hours of Sebring as defending winners.

“We’re delighted to welcome Lithia & Driveway to our 2022 program,” said Chris Pfaff, Team Principal of Pfaff Motorsports and President and CEO of Pfaff Automotive Partners. “As our off-track auto retail colleagues, Lithia & Driveway’s values are very much aligned with ours. They are a passionate group of individuals who value innovation, performance, precision, and speed, and we’re excited to introduce Lithia & Driveway to race fans across the country.We feel that in Pfaff Motorsports they have a partner with a great history and presence that can connect them with their customers and prospects in new and engaging ways.”

As Pfaff Motorsports looks to defend its title at the 12 Hours of Sebring, the Driveway brand will be prominent on Pfaff Motorsports’ No. 9 Porsche 911 GT3 R livery, in addition to placement on team gear and equipment throughout the paddock. Throughout the year, LAD customers and business partners will have the opportunity to attend races and go behind-the-scenes with Pfaff Motorsports, and the two organizations will also work together to create in-person activations and engaging digital content for fans.

“In Pfaff Motorsports, we’ve found the perfect partner to introduce our Driveway brand to passionate and loyal race fans,” said Bryan DeBoer, President and CEO, Lithia & Driveway. “Race fans are intensely engaged with and loyal to the teams they support – and Pfaff has one of the most passionate fan bases in the IMSA paddock. IMSA’s family-friendly environment and the exceptional access that fans have to the teams and drivers will let us build a uniquely engaging platform.”

Added Pfaff Motorsports General Manager Steve Bortolotti, “Lithia & Driveway’s support of IMSA with Pfaff Motorsports is their first racing partnership, so we are looking forward to providing passion-filled and memorable experiences. Together with our colleagues at Spire Sports & Entertainment, we are also committed to ensuring that all Lithia & Driveway employees, dealership partners, customers, and fans receive world-class treatment every weekend.”

A press conference with Pfaff Motorsports and Lithia & Driveway is scheduled during the upcoming 12 Hours of Sebring event and will be held in the Media Center on Friday, March 18 from 10:45 – 11:30 a.m. ET.

Pfaff Motorsports has established itself as one of the most successful sportscar racing programs in North America over the past decade. A professional team in the International Motor Sports Association (IMSA), it has established long-term partnerships with premium brands such as Lithia & Driveway, Motul, and Hagerty, and is one of the top-performing Porsche customer racing teams in the sport.

Pfaff Motorsports’ competition résumé includes historic victories and championships across multiple series. Since joining the top-tier IMSA WeatherTech SportsCar Championship in 2019, the team has won the prestigious 24 Hours of Daytona and the 12 Hours of Sebring, in addition to being crowned 2021 WeatherTech Championship GTD champions. It has also won the 2018 GT World Challenge America championship and is a three-time Porsche GT3 Cup Challenge Canada champion. For more information, please visit www.pfaffmotorsports.com.

About Lithia & Driveway (LAD)
LAD is a growth company focused on profitably consolidating the largest retail sector in North America through providing personal transportation solutions wherever, whenever, and however, consumers desire.

Motul is a world-class French company specialized in the formulation, production, and distribution of high-tech engine lubricants (two-wheelers, cars, and other vehicles) as well as lubricants for industry via its Motultech activity. Present in more than 120 countries, Motul USA was established in 1989 as a subsidiary of Motul France and is based in Southern California. Motul is recognized as a specialist in synthetic lubricants. As early as 1971, Motul was the first lubricant manufacturer to pioneer the formulation of a 100% synthetic lubricant for automotive engines, the 300V lubricant, making use of Esters technology from the aeronautical industry.