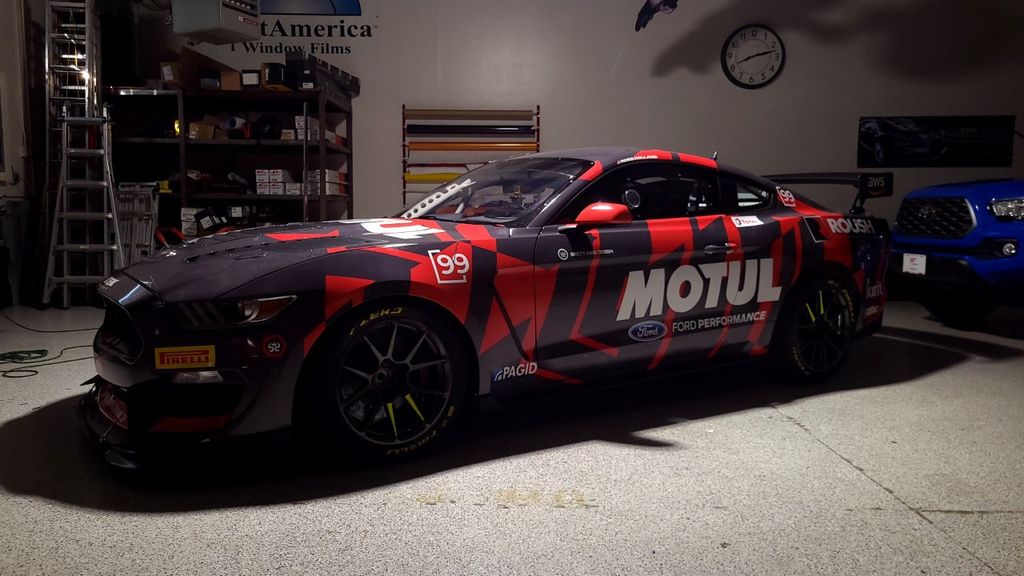 Robb Holland, is returning to American wheel-to-wheel competition piloting a GT4 Mustang in the GT America championship series. Holland last competed full time in America in the Pirelli World Challenge series (the predecessor to SRO) in 2012 when he finished 3rd overall driving the C30 Touring Car for the factory Volvo team. After several successful years competing overseas in the FIA World Touring Car Championships, the British Touring Car Championships and the VLN series at the Nurburgring, Holland returns to US competition making his debut in SRO competition at the wheel of a stunning, Brett King Design liveried, GT4 Mustang backed by Motul, Roush Performance and the Velocity 99 Foundation.

Accompanying Holland across the pond to oversee the program, will be the internationally acclaimed Rotek Racing. The squad is best known for its success in international endurance racing, the British Touring Car Championship and at the Nurburgring. In addition to Holland, drivers such as former world champion Rob Huff, former works Corvette driver Oliver Gavin, and ex-F1 driver’s Gabrielli Tarquini and Tiago Monteiro have helped the team rack up multiple class wins and top 10 overall finishes in the VLN and 24 hours of Nurburgring qualifying races.

As much success as Rotek has had overseas, this isn’t their first visit to the US. The squad last visited these shores in 2013 when they claimed an overall win at the 25 hours of Thunderhill besting a strong GT3 field with a Front Wheel Drive Audi TTRS. But Holland and Rotek aren’t just returning to competition in America to replicate past successes, they have much bigger goals for the program.

With the full support of SRO, Rotek Racing has assembled a diverse crew of some of the top support personal in the industry with the goal of increasing diversity within the paddock. “(Series President) Greg Gill and I have maintained close ties in the years since I left the series” Holland says “One of things we have talked about in depth is the lack of diversity in motorsports in general but within the SRO paddock specifically. Both Greg and I were in agreement that there are multiple benefits, social and financial, to increasing diversity in the series, but I didn’t want a program that just focused on drivers as has been the case with other programs. I wanted to help seed the paddock with supremely talented crew, engineers, managers that have a diverse background. With the goal of helping these people being able to find sustainable employment with other teams in the series and throughout motorsports.”

To that end, the team has focused on seeking out and hiring highly qualified minority technical personnel, engineers, mechanics, and team crew and will give them the access and support they need to be successful at the top level of motorsport. The team is envisioning this program being a conduit for these qualified individuals to demonstrate their abilities and then be hired on by other teams within the series, helping to increase diversity throughout the paddock.

But the teams social commitments don’t end there. Rotek and Holland will work to use their platform to engage high school and college aged students in STEM learning, using motorsports as a teaching tool with the ultimate goal of bringing some of these students through our “pipeline” and giving them experience to succeed at a high level in motorsports or other industries. “Our current crew is composed of guys who have already managed to get to a high level within the sport. For example our lead engineer Brian Ma has engineered cars in ChampCar, Prototypes, WTCR, and led the factory Ford team in the Chinese Touring Car Championship to a manufacturers championship. But the question is where are the next generation of engineers and mechanics coming from?”

“When we started talking to our partners about this program, every single one of them, said they struggle to get kids interested in interning for them. There are no shop classes in high schools, attendance at vocational schools is lacking and there just isn’t an interest in STEM learning from today’s students. Something needs to be done to spark interest in these fields and we feel that motorsports can provide that spark. We will be partnering with Foundation 99 and their motorsports arm Velocity 99 to bring motorsports to students across the country, with a targeted program designed to increase overall interest in STEM learning and at the same time identify students that could be successful within the Rotek organization or with our partners.”

Chris Jamail, Founding Board Member of Foundation 99 "Foundation 99 is proud to be partnering with Rotek Racing and SRO to offer hope and opportunity to young people who have been historically underrepresented in STEM. Through Rotek's professional GT4 race team, the Velocity 99 program is able to provide immersive internships and mentorships in STEM fields."

Details on the STEM program will be released at a later date. The team will take to the track for the first round of the 2021 Championship this weekend at Sonoma Raceway.

Velocity 99 is an immersive internship program designed to identify, develop, and train the most diverse and inclusive generation of motorsports innovators, teams and leaders. Foundation 99 developed this groundbreaking program to offer real world STEM training under the mentorship of a fully diverse professional race team. Velocity 99 will bridge the STEM divide, create an employment springboard, and crowdsource R&D to the next generation of STEM leaders and innovators. High school and college students across the United States will be given an opportunity to participate and gain real-world experience by solving complex engineering and business challenges while working alongside industry veterans in racing.