Not only is Pfaff Motorsports one of the most successful sportscar teams in North America, but the Motul-backed team has one of the coolest liveries of any car on the grid. Talking us through the distinctive plaid livery of the Canadian team is Laurance Yap, creative director at Pfaff and designer of the livery. 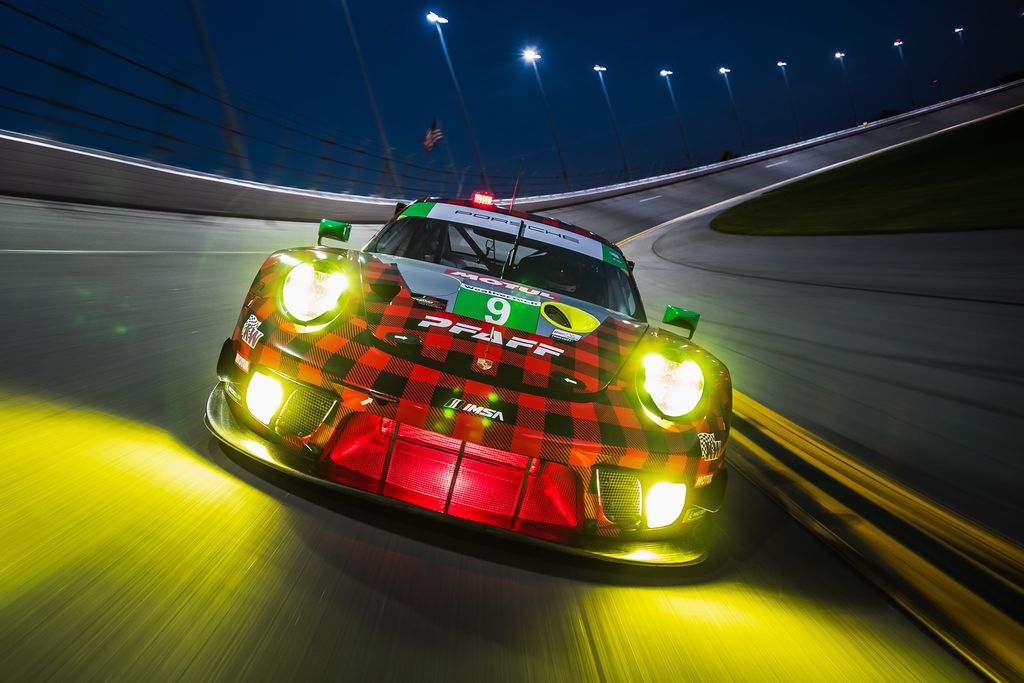 Where do you start when designing a livery for a racing car?

The process for what became the Motul-sponsored “Plaid Porsche” was likely very different from any other livery we’ve done, as it all started at the Pfaff Motorsports workshop on a very cold December day, just after Christmas. The Roar Before the Rolex 24 was coming up, and we hadn’t decided on a livery yet. It being cold, and the crew (and driver Zach Robichon) being Canadian, there were a lot of plaid-patterned flannel shirts around that day. One person commented on how Canadian the scene looked, and that it would be funny to wrap the race car. Which was the flash of inspiration we needed. As we looked at the design, we also started to think that the plaid pattern was a way to express our Canadian identity without resorting to the obvious clichés of using maple leaves on the livery. The plaid resonated with fans, who found it unique and interesting. 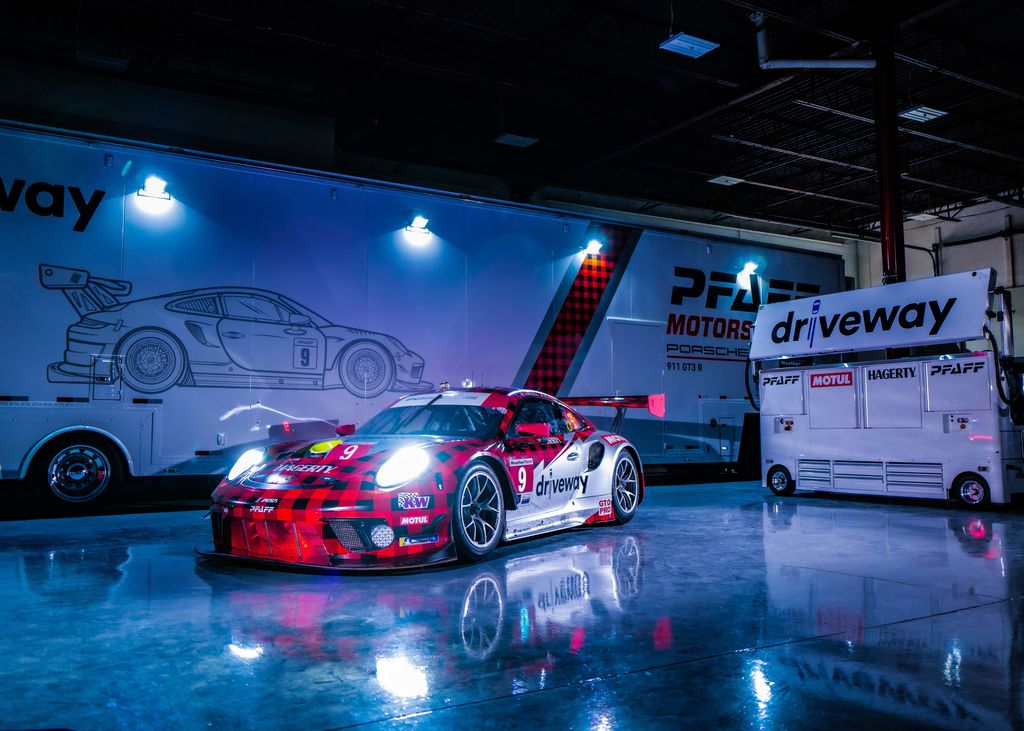 How long did it take and what was the process?

For the Plaid Porsche, the first draft took less than an hour. We found a plaid pattern we liked on a stock artwork site online and used Adobe Photoshop to create a rough draft of the livery by laying the pattern on the body panels of the car. While it was a far from accurate rendering of what the car would eventually look like, it was enough for us to show to our team principal. The design was then printed in black on red vinyl by our partners C17Media, who then interpreted the original design on the actual car. Because it was a pattern, it wasn’t strictly necessary that every piece lined up 100% correctly – just like folds or wrinkles in a piece of fabric. 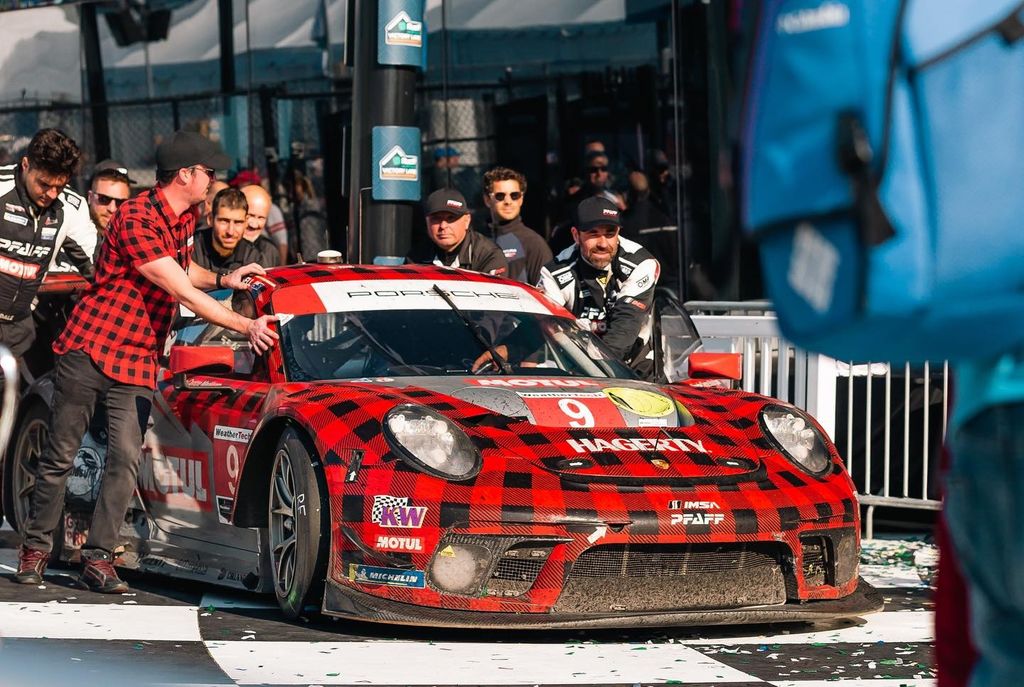 Pfaff has a very distinctive style: what’s that driven by?

Pfaff is distinctive as a team because of how seriously we take our work, but also how much fun we have. We’re a professional, focused team that has a great sense of humour – something that is evident no matter who on the team you talk to: the drivers, the engineering staff, the crew and those supporting us. We think the design of the car reflects that balance of seriousness (in the silver and the sharp transition to the plaid pattern) and fun. 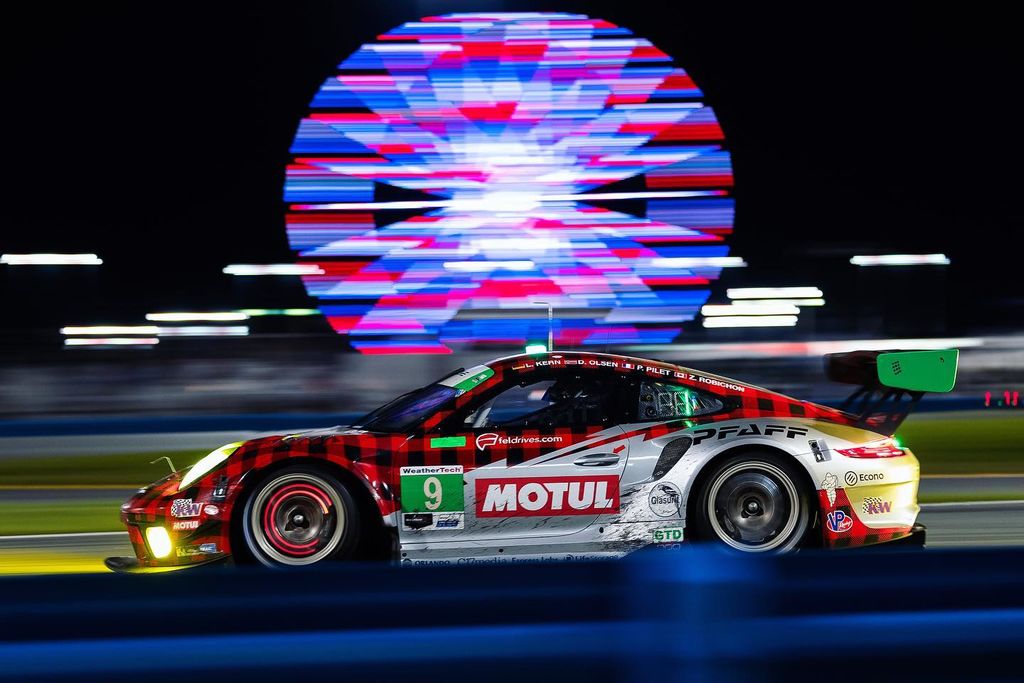 Why is it important for racing cars to stand out – some, like Pfaff, look almost like art cars?

We are privileged to race at the level we do because of the support of numerous partners and sponsors like Motul, Driveway, Hagerty, C17Media, and more. Establishing a distinct identity and standing out from the crowd is important so our partners get the airtime they deserve. And having a distinctive look and feel not just for the car but for the team assets helps build a fan base. While we didn’t set out to do that with the plaid design, that’s certainly been the benefit of it! 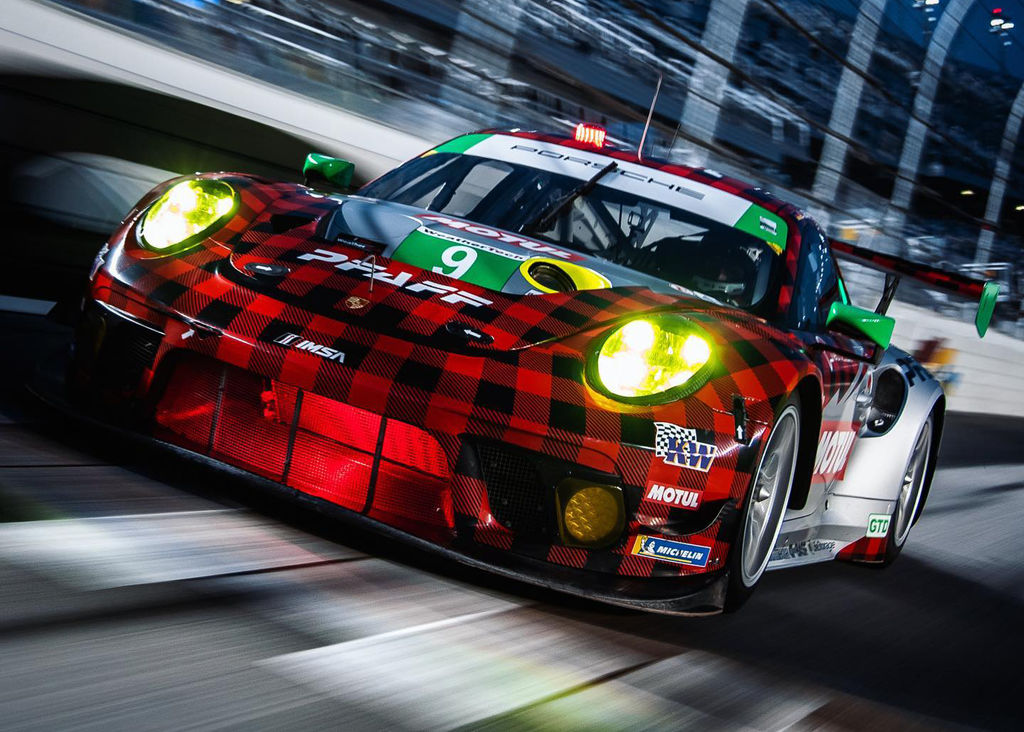 Can you tell us more about the McLaren that’s competing in the FEL. That car, too, has a very distinctive Motul-branded livery.

The McLaren competing in the FEL series and supported by Technica Mining was created by Jason Dakins, a very talented digital artist who we got to know as a Pfaff Motorsports fan. He helped us create some t-shirts for the team in 2021 and designed the livery for the McLaren. 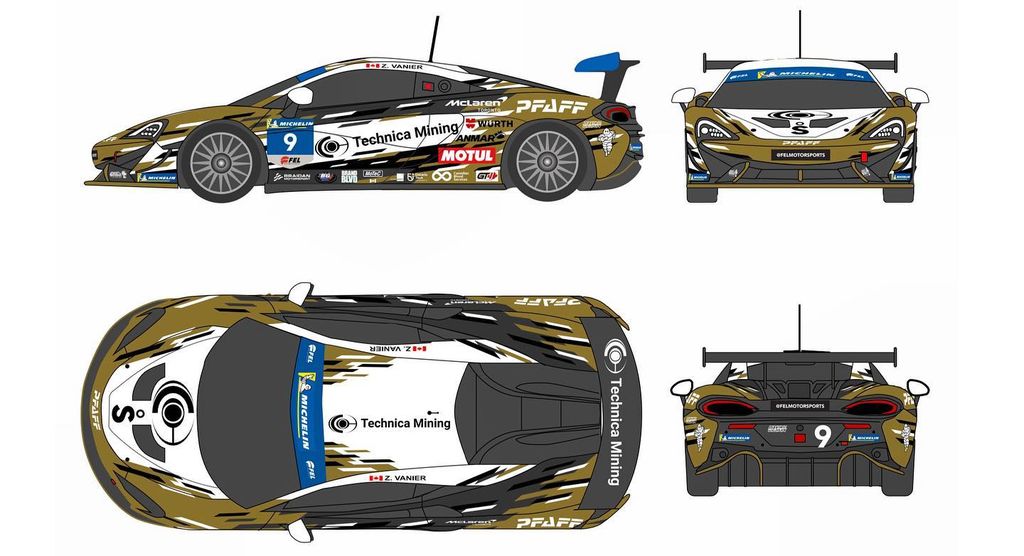 Motul and Pfaff seems to be a perfect match, both creatively and technically.

Motul and Pfaff are a match made in heaven not because of the livery but because our cultures are so similar. We’re both hard-working, serious about what we do, obsessed with being the best – but also brands that have a sense of humour, that love to have fun, and that are passionate about all things automotive and racing-related. When we first partnered, I’d already started working on liveries based around the Motul logo that didn’t feature any plaid, but they were quick to say that we should retain our distinctive look, which was music to our ears. The final design incorporates the Pfaff plaid with references to Motul-sponsored Japanese Super GT race cars. 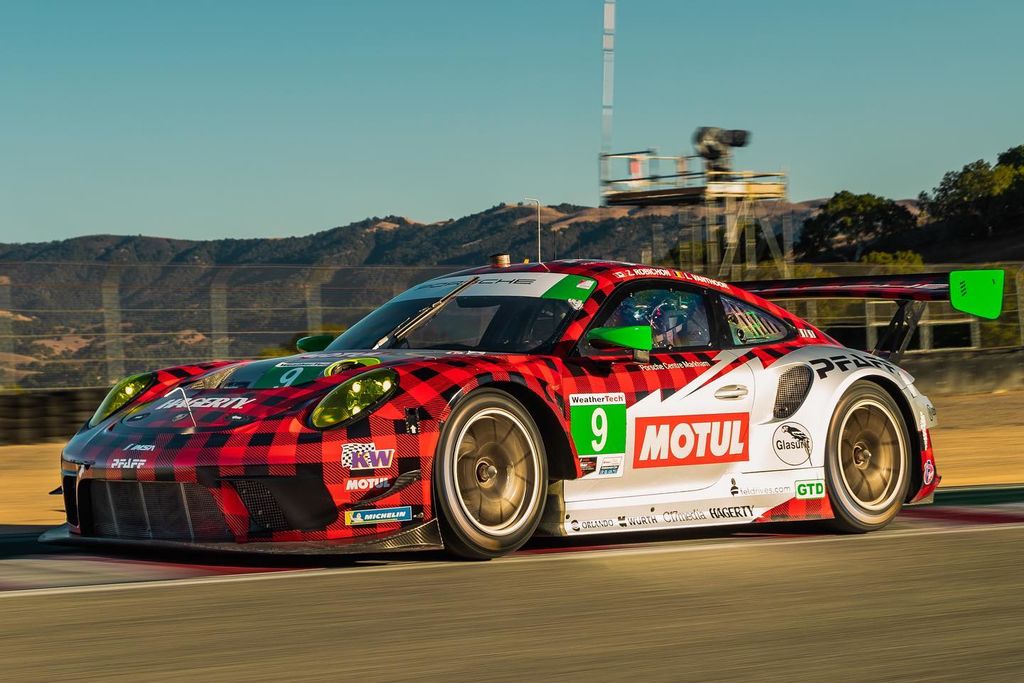 I don’t have a background in creating liveries at all – in fact, I have a degree in writing creative fiction, and a professional background that went from editorial to public relations and then to marketing. On a daily basis at Pfaff, I look after the marketing needs of our two Porsche dealerships (in Vaughan and Markham, Ontario) and a number of corporate projects. 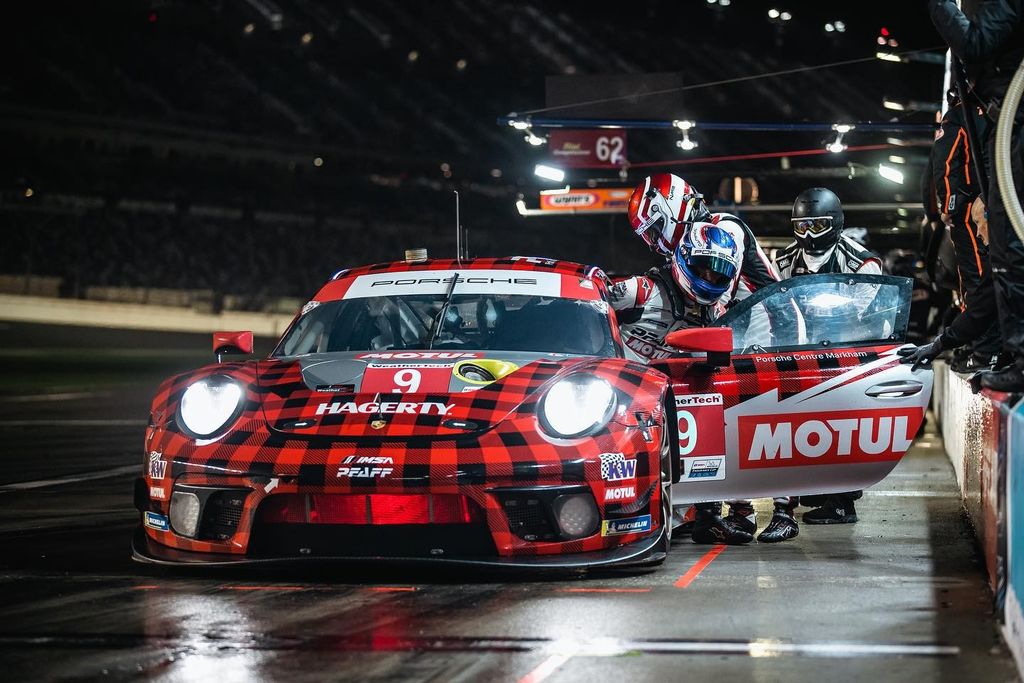