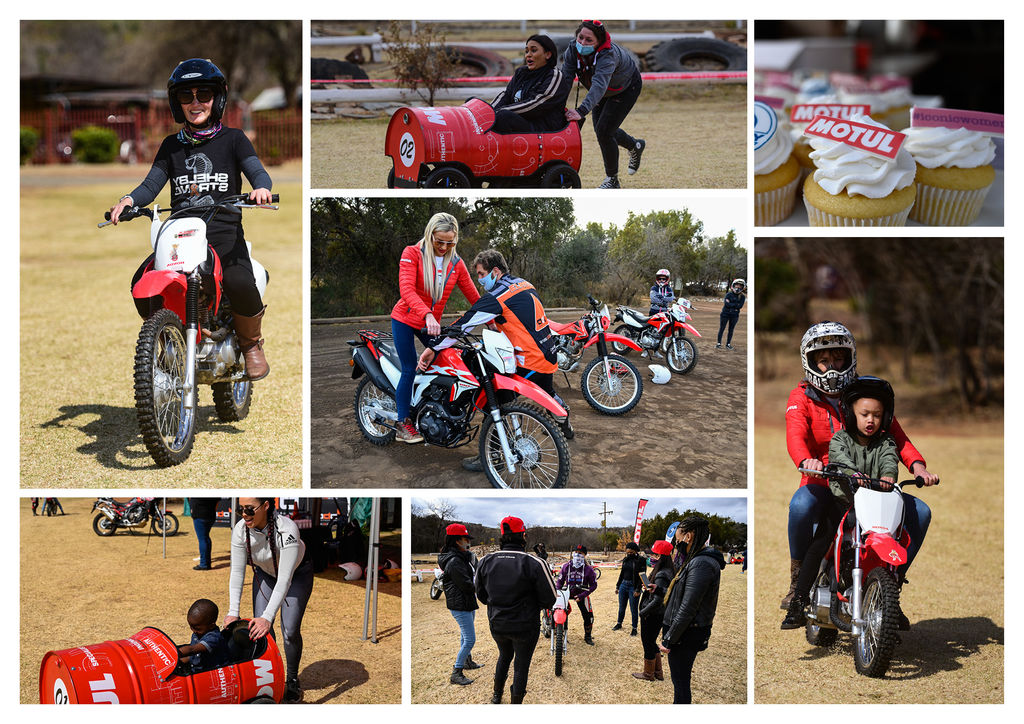 On Saturday 22 August 2020, Motul South Africa demonstrated its commitment to the ideals of Women’s Month and the #IconicWomen campaign. In partnership with Honda South Africa, the Motul team hosted a LEARN TO RIDE A MOTORCYCLE day at ADA Training and Outdoor Centre.

This event was a natural follow-on to the nomination of Motul’s own Mercia Jansen as part of the #IconicWomen campaign developed and managed by Shelby South Africa and Road to Race.

“As part of this campaign, we have each created an opportunity for women to participate in something that we’re passionate about. My love of riding is something that I have always wanted to share with my other women – hence the LEARN TO RIDE A MOTORCYCLE day” explained Mercia Jansen, Motul Area Manager for Southern and Eastern Africa. “I have loved seeing all the videos and photos from our day – the ladies’ beaming smiles made it clear how much fun they were having, while the pride and encouragement from their partners and families made the experience even more special,” she added.

Adilia Joubert, one of the participants, reported that she was excited to have had the chance to learn to ride machines that had previously seemed too intimidating. “I was inspired by Mercia revealing that she had only started riding bikes at 40. Since I have also recently hit that milestone, and in the spirit of life beginning at 40, I wanted to try something new and more daring than my other hobbies. My husband is a keen motorcyclist, and this has been something I’ve wanted to share with him, but until now the fear factor was just a little too much for me,” admitted Adilia. “Now that I’ve had this great experience, he can look forward to some company on his weekend rides,” she added.

Throughout the day, the ADA Training and Outdoor Centre in Hartbeespoort, North West Province, echoed to whoops of joy as the lady riders grew in confidence and began to experience the feeling of freedom that motorcyclists often refer to. There was a real sense of camaraderie between the women and their partners, while the atmosphere at the venue contributed to a successful day for all the novice riders. A big thank you to Honda SA for supplying the bikes and allowing the attendees – the riders and their partners - to test out all the different models!

Legendary motorcyclist Brian Capper was on hand to assist and support the ladies during their training, as were the professional trainers supplied by ADA Training and Outdoor Centre. The children who had come along to watch their Moms in action also got to enjoy the pedal cars provided by Motul. The sight of women riding bikes while husbands, brothers and uncles pushed the kids up and down the grass in the pedal cars was exactly the kind of role-reversal moment that the #IconicWomen campaign aims to inspire.

The training session was followed by lunch, with sparkling wine supplied by the Boschendal Wine Estate.

Women connect with this term but I feel men maybe not as much.  So change to with other women.

“As a racing car driver, I was delighted to have the chance to swap my usual four wheels for just  two,” enthused Shelby SA/Road To Race’s National Marketing Manager Paige Lindenberg – the lady who first conceived the idea of the #IconicWomen campaign. “The professionalism and patience of the trainers meant that we all felt comfortable enough to push ourselves a little more each time we got onto the bikes,” added Paige. She also urged women to look out for forthcoming experiences including a hot lap with Lindenberg in her racing car.

Both Mercia and Paige reflected on how successful the #IconicWomen campaign has been in building women’s confidence and inspiring them to break down stereotypes that may previously have discouraged them from trying the kind of new experiences that have traditionally been seen as “male-dominated.”