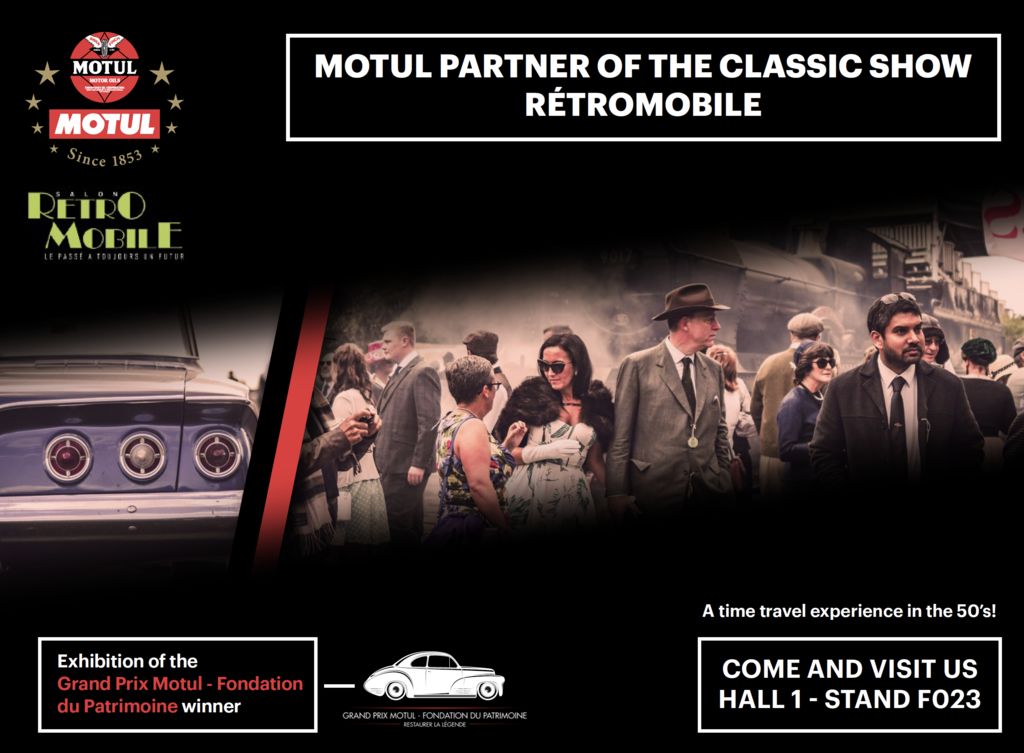 Motul’s name and iconic colors will once again feature strongly at the best and most anticipated classic car show of the year, Rétromobile, which takes place from 6-10th February at the Paris Expo at Porte de Versailles.

As the major partner of the fair, and leading supplier of lubricants to the classic car market, Motul is present in Hall 1 - F023 alongside the 650 exhibitors representing all that is historic and splendid about automotive! More than 600 cars will be exhibited at the 44th Rétromobile edition with 100 car clubs represented and a large enthusiastic turnout of visitors, all knowledgeable and ready to explore. Several major events are planned!

This year, the high-performance lubricant specialist is dressing up in 50s-style costume to take you on a real trip down memory lane with the theme “Goodwood Revival”. In 2018, Motul became the exclusive oil and lubricant partner for this legendary event dedicated to classic vehicles, recreating the romance and glamour of motorsport in that era. Immerse yourself in the 50’s atmosphere and get your gifts and goodies!

Ten years ago, Motul and the Fondation du patrimoine forged a partnership making Motul their exclusive patron when it comes to motoring heritage. The passion for classic motor vehicles and their preservation is deeply engrave in Motul’s core values. Since then, more than 40 historic vehicles have been restored to their former glory.

Don’t miss the chance to be there when the curtain goes up on the Grand Prix National Auto 2019 at the Motul cocktail party, which will take place during the preview evening on Tuesday 5th February at 7.30 pm.

There’s nothing like a specialist for maintaining a classic vehicle

The best-informed collectors have not been forgotten! They will be able to talk to Motul experts to get information on the classic range of lubricants, whose formulations are adapted to the specific needs of the engines and gearboxes of historic vehicles. This classic range, and numerous maintenance products, are available all year round at your local dealer that you can find on www.motul.com.

Visit the Motul stand to benefit from a special offer. A discount of 20% is offered over the whole range of products. The special collector’s oil can made for the Goodwood Revival 2018 is available with purchases of 100€ or above and is bound to please the most enthusiasts! It is difficult to imagine a better reason for visiting the motor show than the Motul stand, a concentration of passion!

Unanimously recognised for more than 165 years for the quality of its products, innovation capacity and involvement in the field of competition, Motul is also recognised as a specialist in synthetic lubricants. As early as 1971, Motul was the first lubricant manufacturer to pioneer the formulation of a 100% synthetic lubricant, issued from the aeronautical industry, making use of esters technology: 300V lubricant.