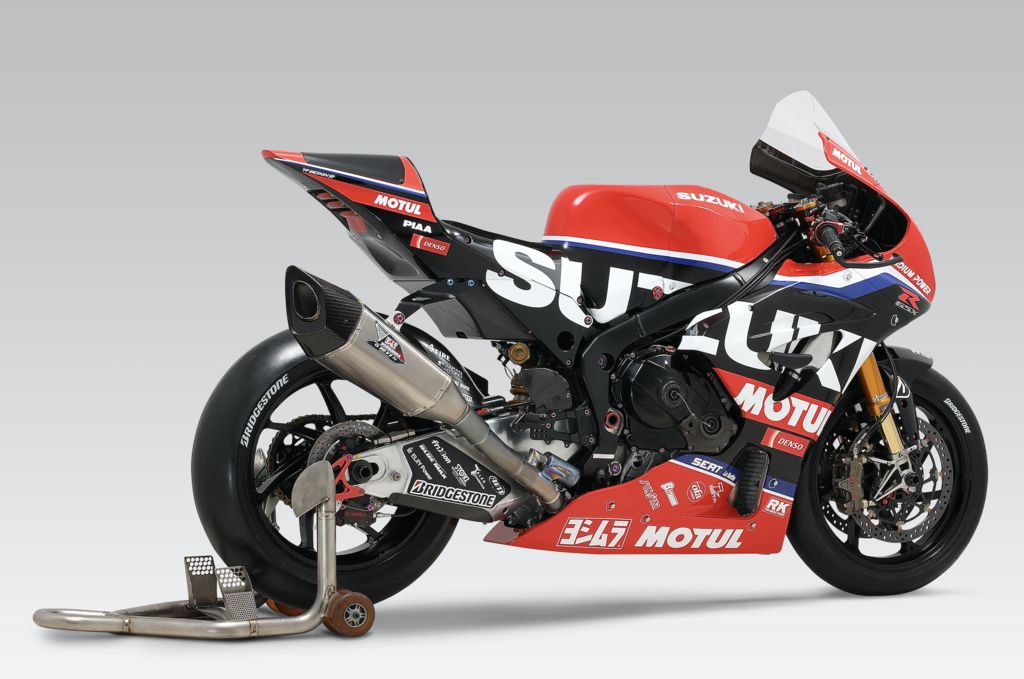 A new combined force of iconic motorcycling names will attack the FIM Endurance World Championship from 2021, and Motul is at the very heart of the programme which was announced today (Saturday, 31 October) during digital press conference by Eurosport Events. The Yoshimura SERT Motul Racing Team unites the Suzuki, Yoshimura, SERT and Motul brands to fight for success and many (more) world championship titles.

New, but far from unknown…

We say “new” but in fact Motul has been a partner for many years to both Suzuki, SERT and Yoshimura, providing its deep technical race-winning expertise to the manufacturers and the factory team. The relationship between the parties is therefore far from unknown.  What is new is the combination of the three entities in the FIM EWC:  Yoshimura, a legendary name in biking and one of Motul’s partners since 1986; SERT, the official Suzuki Endurance Racing Team, which recently claimed its 16th Endurance World Championship, with Motul alongside it for the vast majority of these as a proud official lubricant partner; Motul, which becomes title sponsor of the team as part of a multi-year agreement, reinforcing the 30-year collaboration between the Japanese manufacturer and the international lubricant specialist which goes from strength to strength, year on year.

The power of partnership…

The Yoshimura marque reunited with Motul in 2017 to compete in the Japanese Superbike Championship & MotoAmerica and bring a huge amount of experience and know-how from Japan to challenge for victory.  SERT, now under the leadership of Team Manager Damien Saulnier and working from a brand new HQ in Le Mans, is quite simply the most prolific and successful team in the history of the EWC.

The Yoshimura SERT Motul Racing Team will rely on Motul’s Factory Line of specialist products including 300V, the engine oil specially formulated for racing applications providing maximum output while preserving the reliability of the engines for endurance races.

Nicolas Zaugg, Chief Value Officer, Motul: “What racing association makes more sense than the Yoshimura – SERT one? SERT knows better than any other team in the world how to succeed in endurance racing, while Yoshimura has been providing performance tuning packages and developing racing kits for years thanks to its unique R&D capabilities. For Motul, being the title sponsor of such a team, made up of two iconic names from the motorcycle world, is not only obvious as an opportunity to showcase the technological quality of our products, but it is a dream come true after so many years of supporting both teams from opposite sides of the world! We want to thank Fujio Yoshimura, Damien Saulnier, and of course Dominique Méliand who in spite of his retirement is for sure keeping an eye on the team, for the renewal of their trust in us and we wish them the very best for the season of racing ahead.”

Fujio Yoshimura, President of Yoshimura Japan Co., Ltd: “We are very excited that we officially announce Yoshimura SERT Motul is taking on the challenge of the FIM Endurance World Championship Series in 2021 season. Due to the Corona Virus pandemic, we didn’t know when and how this challenge itself would start but finally we are getting ready to be on the starting grid.
Motul became our partner back in 1985 very first time and it was the year Suzuki GSX-R750 was introduced. We won the TT-F1 All Japan Champion in 1985 and 1986, proving the performance of Motul oil.
The new team for EWC in 2021 consists of international members, but everyone's goal is one.
"Powering to the Victory". We will aim for the EWC title with Motul.”

The Motul/Suzuki association, however, is not limited to the FIM EWC. For more than three decades Motul has also been supporting the Suzuki team in MotoGP, working hand in hand on both technical development and marketing activation all over the world. This winning alliance is currently leading the 2020 MotoGP Championship standings for both teams and riders!

JEKILL AND HYDE: TEAMING UP WITH MOTUL AND HARLEY-DAVIDSON!