One thing the Porsche 911 Turbo S Cabriolet certainly isn’t short of is power. It’s one of the fastest cars Porsche currently makes. But that hasn’t stopped the engineers at German tuning company Brabus from having a go at making it faster. And they have certainly delivered. 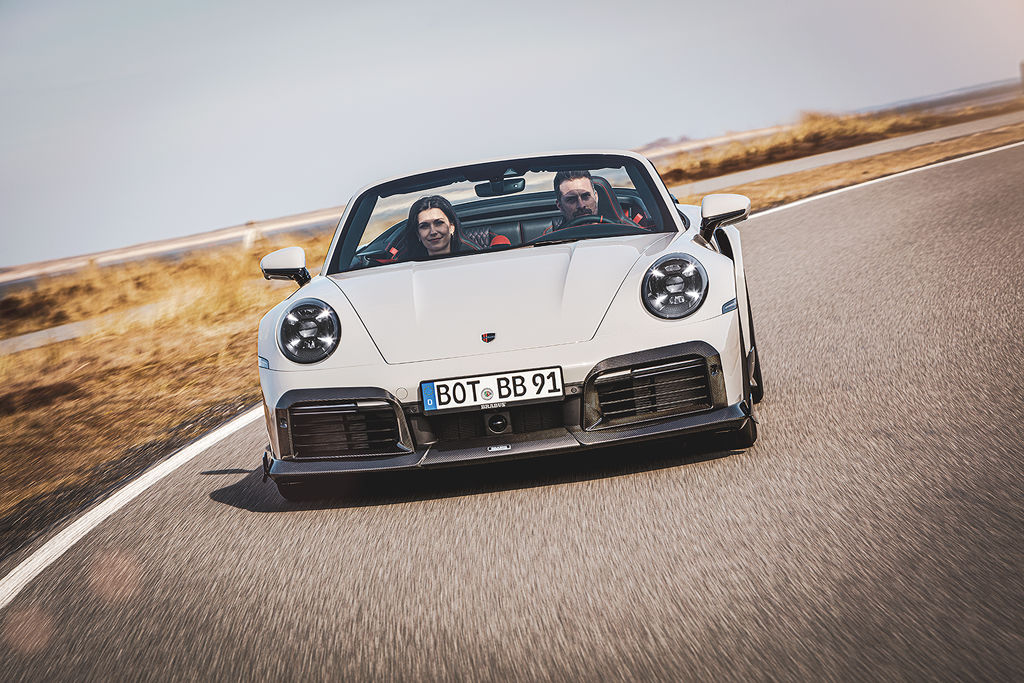 The Brabus 820, so named because of the 820hp the 911 Turbo S Cabriolet now produces, is a significant upgrade over the standard car’s 650hp. The results are spectacular. The dash to 100km/h now takes just 2.5 seconds, with 950Nm of torque providing monumental muscle throughout the rev range. The top speed has also been increased from 330km/h to 340km/h. 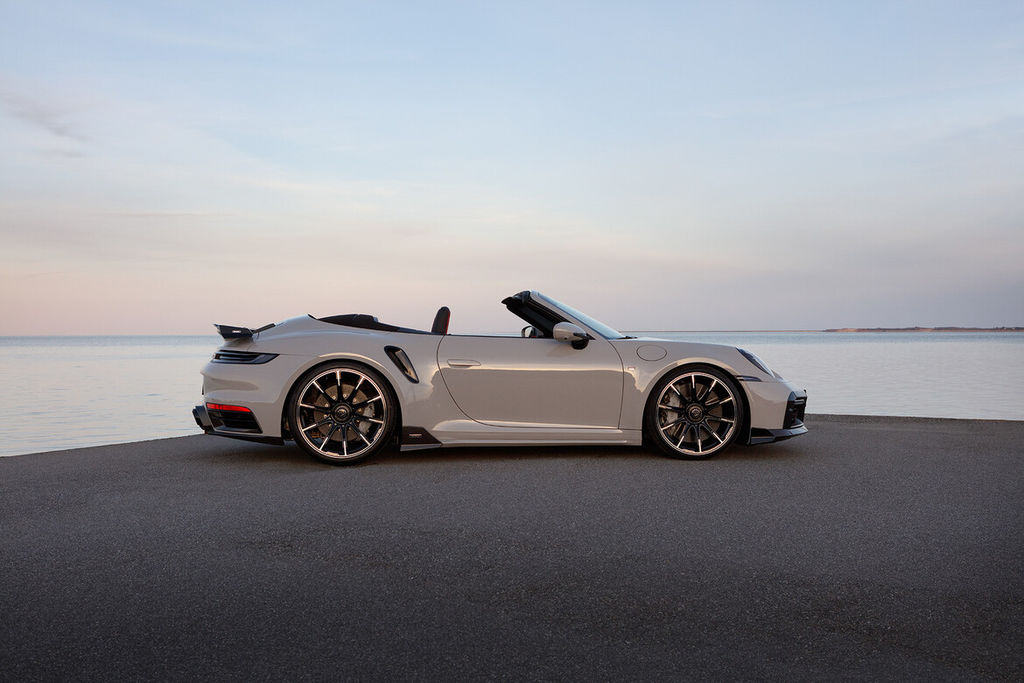 Brabus recommends the continued use of Motul products

The 3.8-litre, twin-turbo flat-six Porsche engine has been boosted with new turbochargers, which deliver the power to the road through an eight-speed double-clutch auto and manual gearbox. As a technology partner of Brabus, Motul supplies the hi-tech lubricants for the entire powertrain. Every Brabus car leaves the factory with Motul engine and gearbox lubricants, brake fluids and coolants and the tuner recommends the continued use of Motul products. 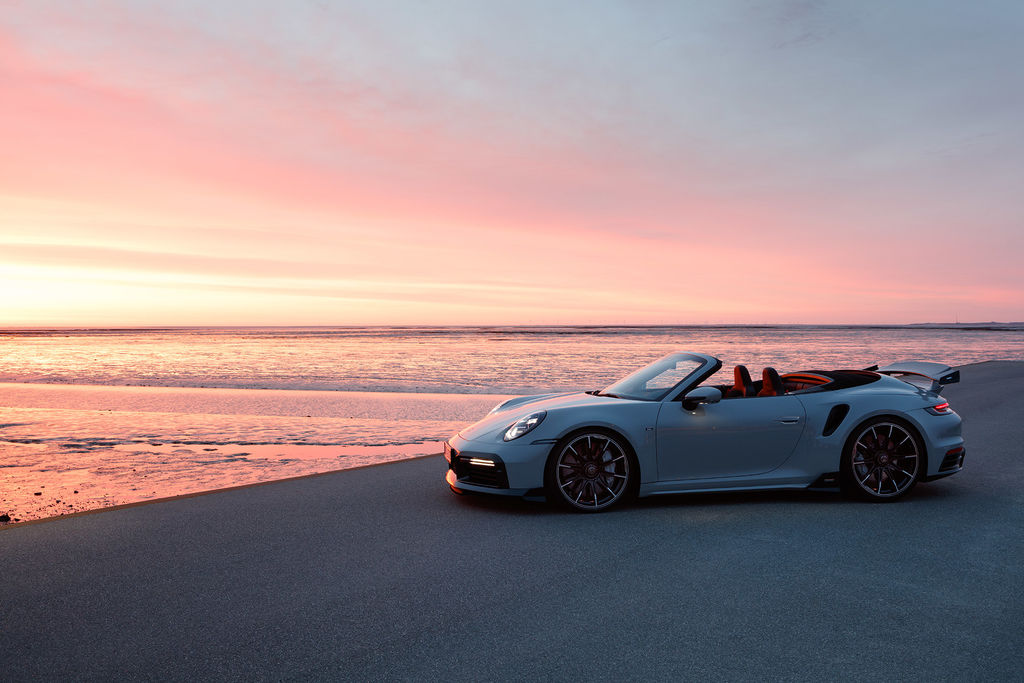 As part of the performance upgrades, Brabus has also created a new high-performance exhaust system made from “Inconel”, a lightweight, heat-resistant alloy that is used in the fabrication of the exhaust systems of Formula One cars. The driver can choose between a subtle “Coming Home” mode and the open “Sport” position of the exhaust valves depending on how noisy they want the car to be. 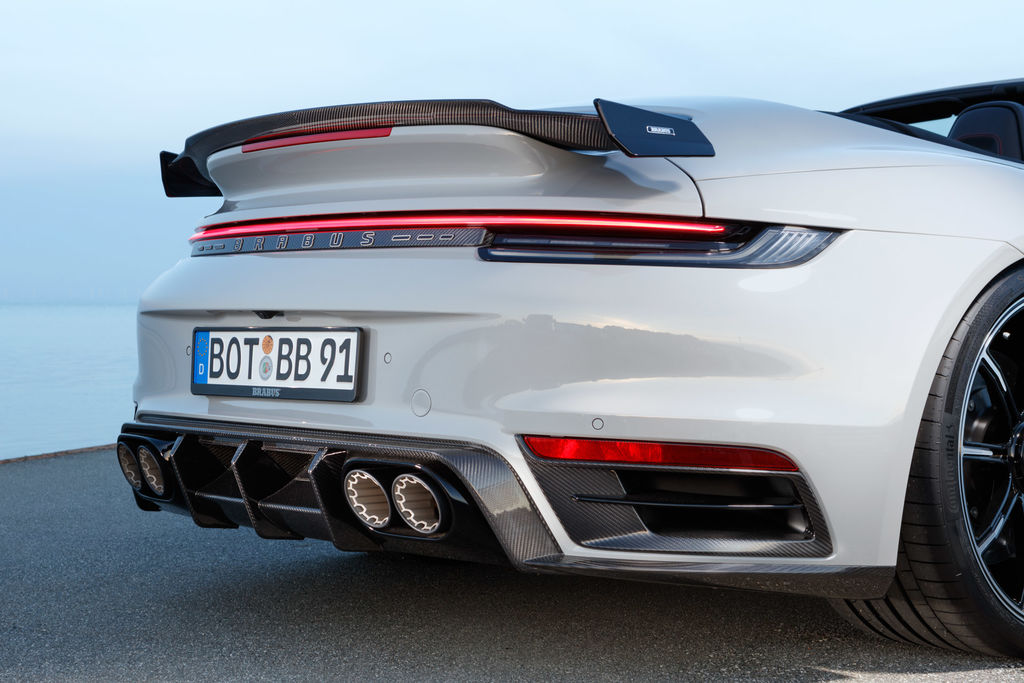 New aero lets the car glide through the air

For the Brabus 820, the engineers took to the wind tunnel to create aerodynamic bodywork components to help the car glide through the air, reduce lift and optimise air flow around the car. The aero package is rounded off with a carbonfibre diffuser at the rear and a new rear wing that generates more downforce. There are also new “Platinum Edition” centre-lock wheels and a redesigned sports suspension system that allows the car to be lowered by up to 25mm. 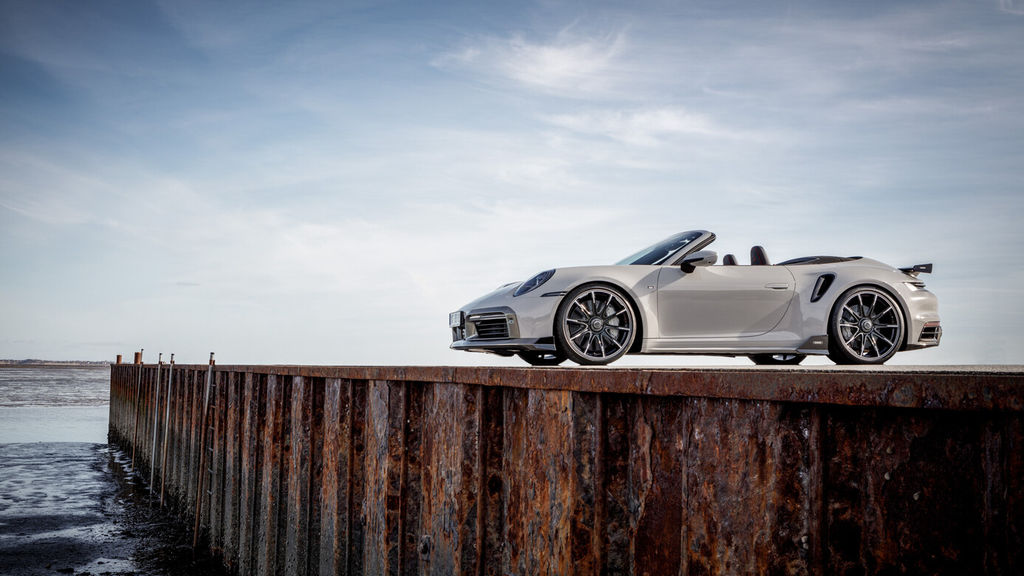 Design wise, Brabus Masterpiece badging adorns the interior and exterior, while the cockpit has been given black leather that contrasts beautifully with the grey exterior. 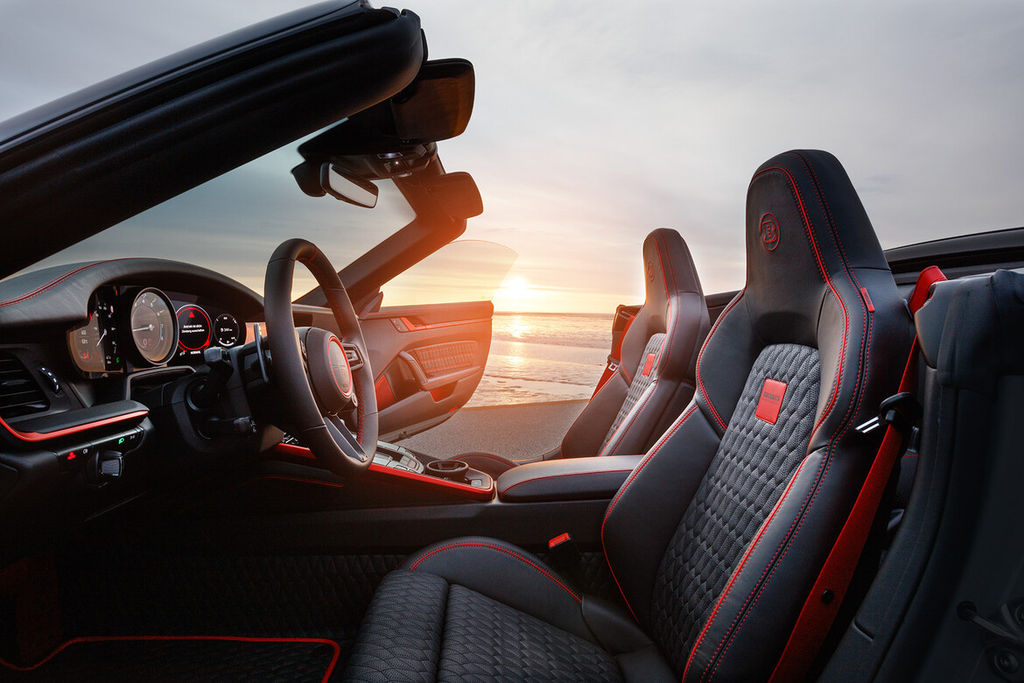 Brabus has also developed another plug-and-play performance pack, the PowerExtra P38S-720, which increases the output of the standard Turbo S by 70hp. Using new maps for the injection, ignition and boost pressure, it improves the performance, acceleration and top speed of the standard model. 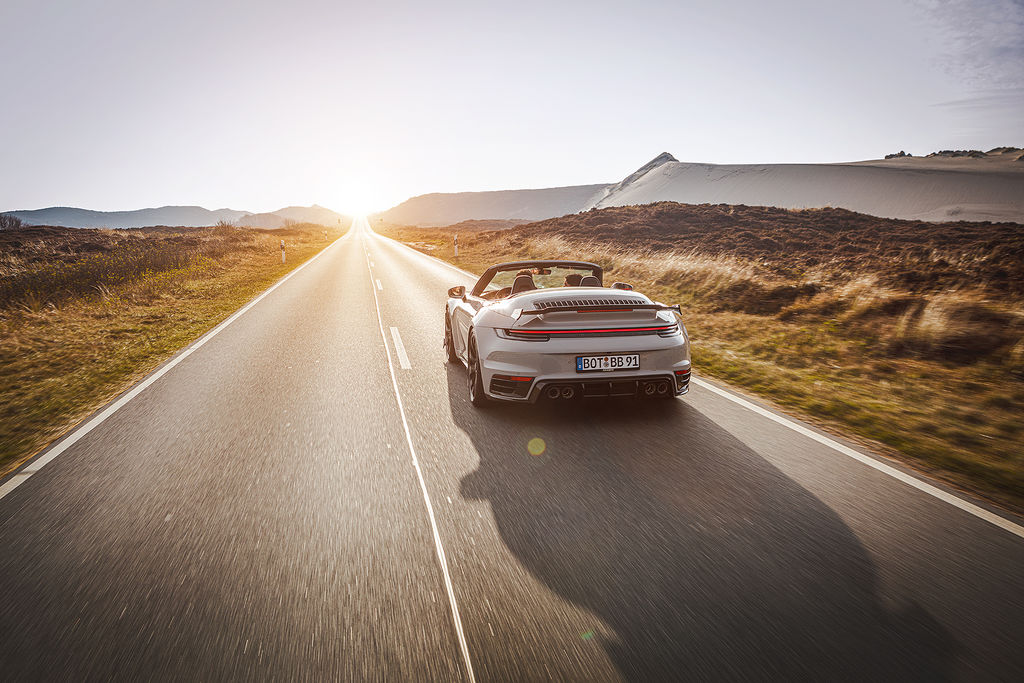 Revealed at the same time was the Brabus Porsche Taycan Turbo S. Unlike the 911, the all-electric Taycan didn’t receive any performance upgrades, but the design tweaks aren’t just for show either. A new carbon front splitter has been added to reduce front lift at high speeds while a three-piece rear spoiler and a rear diffuser help to keep the car’s back end on the ground. Added to the design overhaul are new 22-inch, 10-spoke wheels and a tweak to the air suspension, which sees the Brabus Taycan sitting 20mm lower. There’s also a more colourful black-and-green interior with quilted leather, flashings of carbon and plenty of Brabus badging throughout. 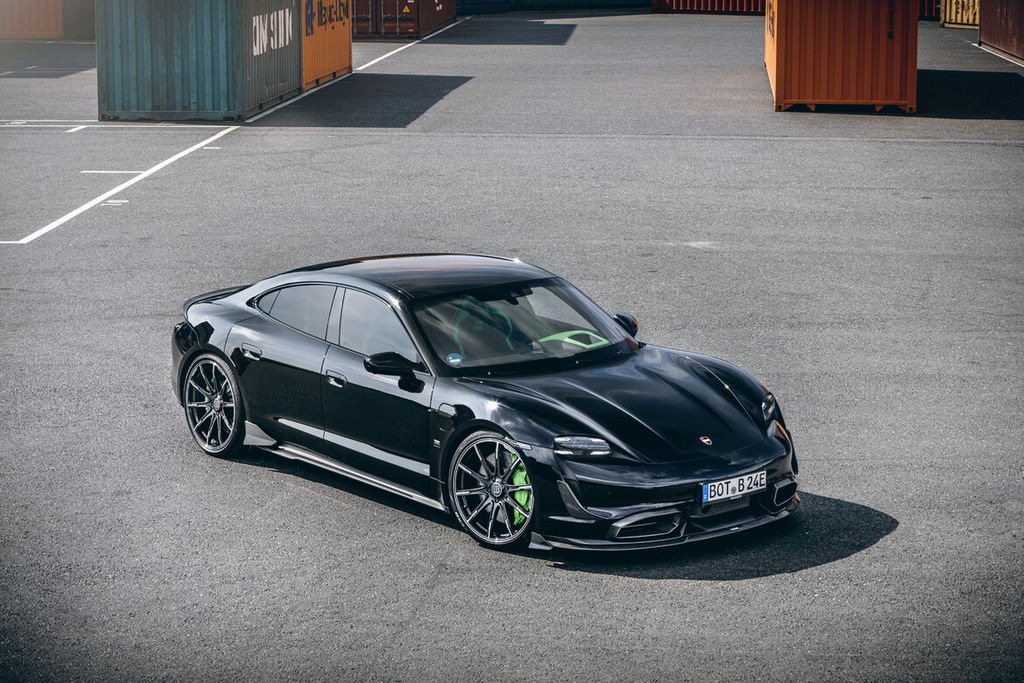