Motul and Suzuki celebrate 30 years of collaboration in MotoGP 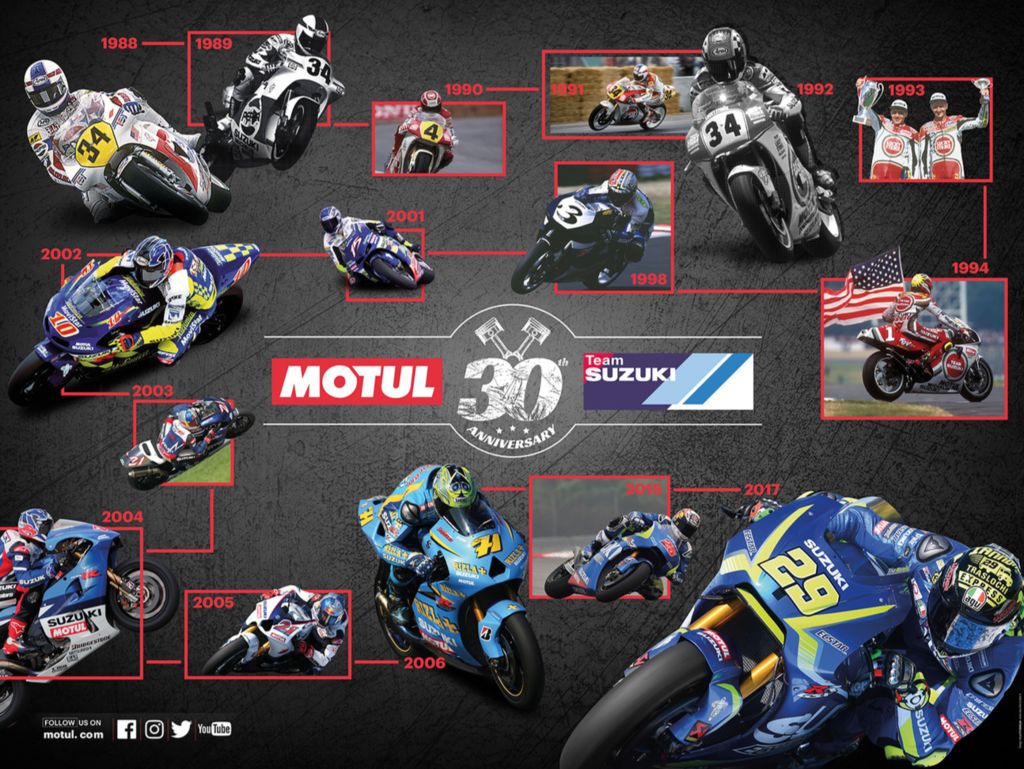 Many manufacturers work with their technical partners for a number of years to build expertise and experience, but there are few that have the length and strength of collaboration as that between Suzuki in MotoGP™ and Motul…30 years and counting!

The famous Japanese corporation first entered a works team in MotoGP (although it was then known as the 500cc Grand Prix World Championship) in 1974 with a Suzuki RG500, but it was from the start of the partnership with lubricant partner Motul that Suzuki really made its mark in the modern era.  Aside from winning two world titles in 1993 with Kevin Schwantz and another in 2000 with Kenny Roberts Jr, there have been no fewer than 39 victories over the years on Suzuki machinery lubricated to success by Motul, the most recent in 2016 with Maverick Viñales.

Over these last three decades, Suzuki’s engineers and Motul’s technical experts have forged a deep-seated understanding and symbiotic working relationship. The perfect oils have been developed especially for Suzuki’s engines, including an exclusive, experimental lubricant for use in Suzuki’s MotoGP prototypes, which responds to the extreme conditions and mechanical restraints presented by the top level in two-wheeled competition.  Those 30 years of collaboration have helped in the development of Motul’s Factory Line, a racing-oriented range of products, that Suzuki MotoGP team is using as well.

Team Suzuki MotoGP’s latest bike, the GSX-RR is this year in the hands of Grand Prix winner Andrea Iannone and young Spaniard, a former Moto2 runner up and Rookie of the year, Alex Rins.

MotoGP remains at the pinnacle of the competitive motorcycling world, and year after year is a living laboratory for Motul to develop and innovate new products which are destined for the brand’s 90+ markets worldwide.

Both brands are going to celebrate this anniversary with their closest partners during the 2017 Motul MotoGP Grand Prix of Japan mid-October. 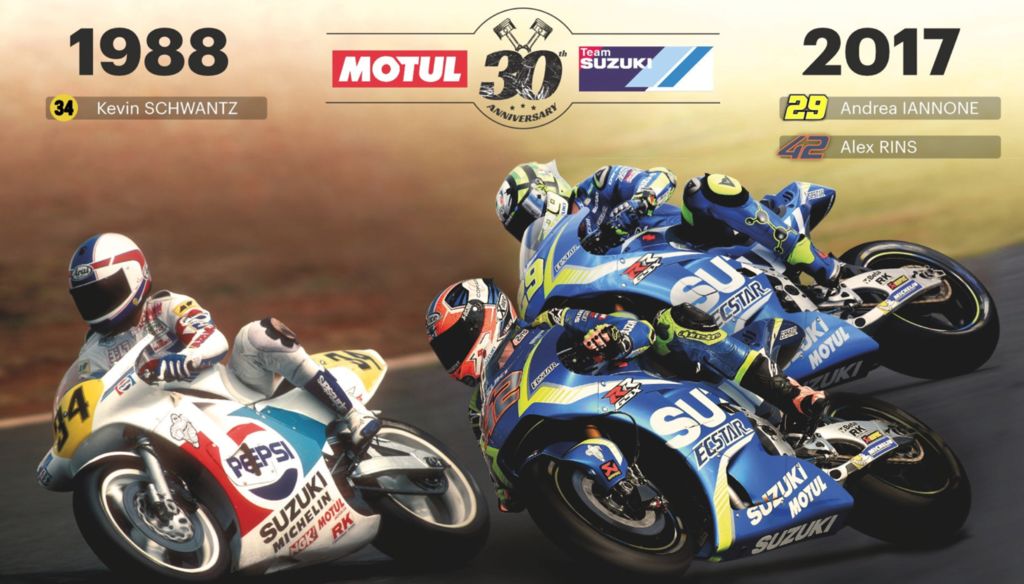 Mr. Masahiro Nishikawa, Executive General Manager, Motorcycle Operations at Suzuki said: “Suzuki Motor Corporation is proud to have enjoyed such a long and mutually beneficial relationship with Motul. A 30-year partnership with one single technical partner in the rapidly developing world of Grand Prix motorcycle racing is an extraordinary achievement for both companies. It certainly proves the total belief that both Suzuki and Motul have in the value of this unique relationship in developing both Grand Prix winning motorcycles and Grand Prix winning lubricants. Suzuki Motor Corporation looks forward to continuing this long and successful relationship with Motul as we continue on our MotoGP development program together.”

President of the Managing Board at Motul, Hervé Amelot added: “Motul is extremely proud of the very special relationship it has with Suzuki, one of the world’s best known and most successful manufacturers. What has been achieved in MotoGP has been the result of a great collaboration over 30 years which is focussed around communication, vision and an endless pushing of the boundaries of technology.  We look forward to many more years working together, and will enjoy celebrating this anniversary with Suzuki!”

Build yourself a Nissan Nismo GT-R!

HOREX and Motul join forces: from development to the final oil fill!

NISMO CEO, TAKAO KATAGIRI: “OUR PARTNERSHIP WITH MOTUL IS A LOT DEEPER THAN CAN BE SEEN FROM THE OUTSIDE”