By its very nature, most cycle competition consists of seeing how fast or how far a cyclist can ride over a predetermined distance. Cycling competitions started way back in the 19th century. One of the ways of increasing a cyclist’s speed performance was to pace them with another vehicle to lead him to greater efforts than he would make when unaccompanied. This is where the ‘Derny’ pedal-assisted motorcycle steps onto the stage. This specific ‘Bordeaux-Paris’ type has recently been found in the south of France and purchased by the Motul heritage department. Romain Grabowski, head of brand at Motul, talks us through it. 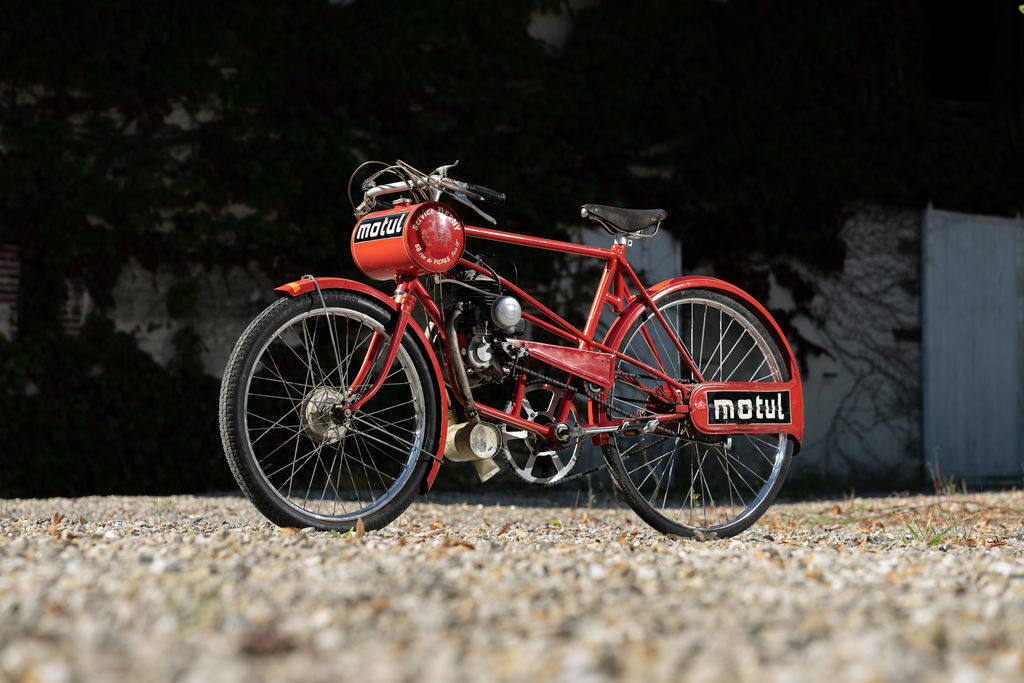 Romain, what exactly is this motorcycle?

During the early days of fast road cycling, specialised pacing motorcycles were introduced in the indoor cycling world, capable of running steadily at cycle speed—or just above—while giving a measure of wind protection to aid the rider to reach higher speeds.

In 1936 ‘The Bicycle’ pictured a new cyclo-moteur being tested at the Parc des Princes and early in 1938 a more developed version was under test by the organisers of France's longest paced race, the Bordeaux-Paris. In March 1938, 'Cycling' revealed the Derny machine in the form in which it was to be used during races in velodromes and on stretched open roads, allowing cyclists to reach higher speeds than before. 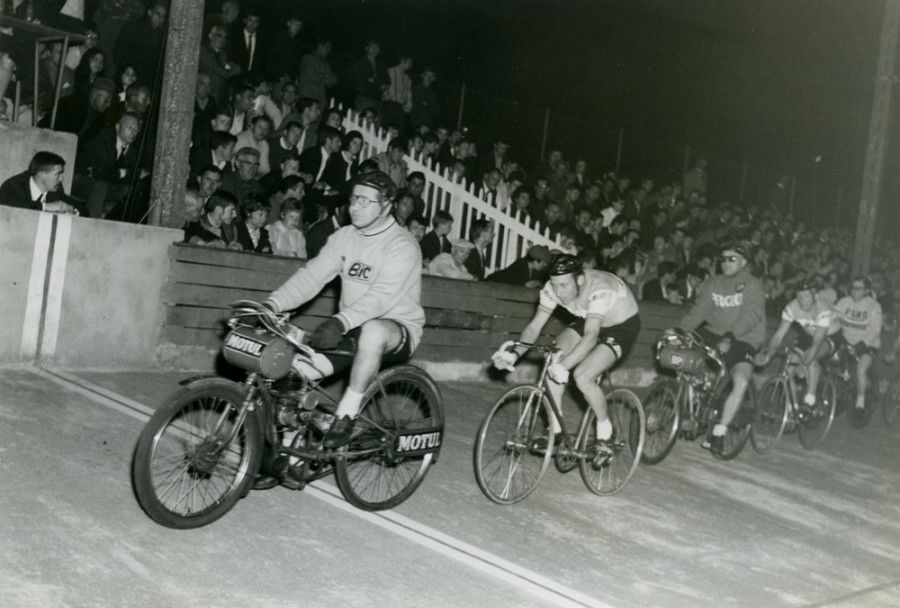 What’s the history behind the Derny brand?

The Derny was designed and made by Roger Derny and Sons, who were former racing cyclists themselves, in Paris’s Twelfth Arrondissement. It is basically a strong cycle frame with a racing pattern with two extra frame members bowed outwards and a linking steering head and saddle tube. A tubular mount rises from near the pedal assembly to support a Zurcher 98cc deflector-piston two-stroke single engine with an integrated clutch and two-speed gearbox of antiquated design. The unit has a heavy outside flywheel rotating between the rider's knees and a separate magneto ignition.

It is, however, a unit that pulls strongly at low rpm enabling on-the-throttle speed to be precise without the clutch slipping or a lot of changing gears. The fuel is contained in a drum-shaped tank - a Derny trademark - in front of the steering head and the pedal gear is fixed, forcing the Derny rider to pedal at all times.

The exhaust silencer was not particularly effective, and the gearbox gears are straight-cut, as is the primary transmission. Both are only lubricated by oil mist, leading one French commentator to write that “the song of the Derny sawed at the ears of both its rider and the following cyclists”.

No Derny had ever broken down in the race, said the company in its very limited advertising. In 1956 an avantgarde motorcycle, the Taon, was launched but it did not save the company, which was forced to close its doors in 1958 after making perhaps 7,000 machines. The market for a cycle-orientated ‘healthy-pedalling’ machine was gone. 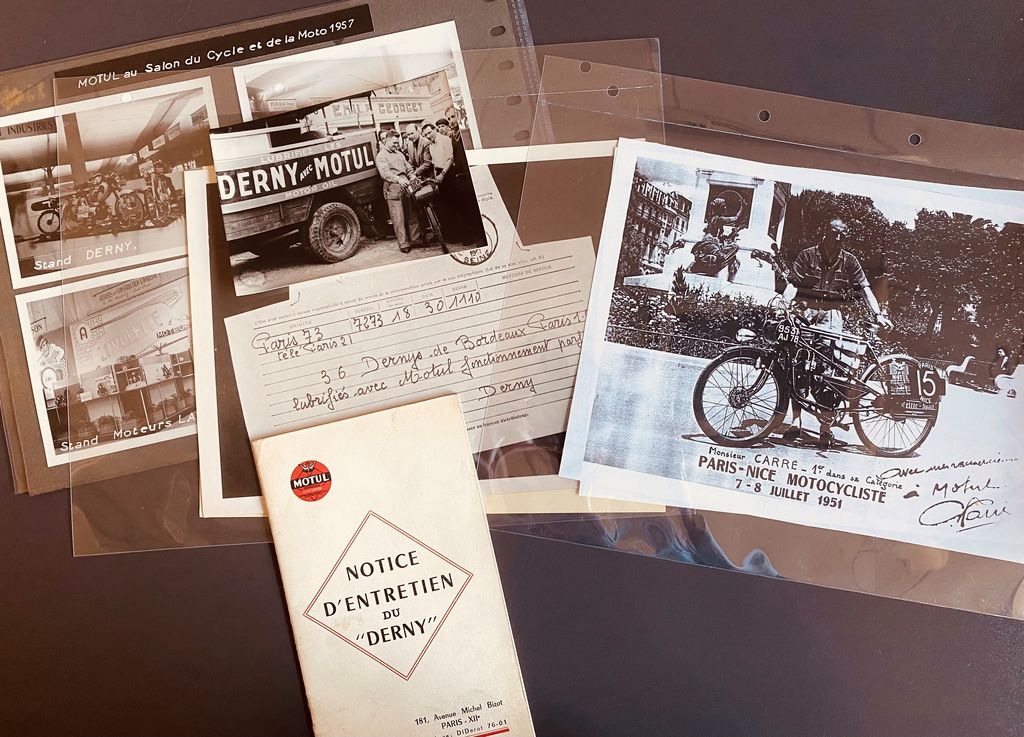 What is the link with Motul?

The Derny was made in relatively small numbers from 1938 to 1958 when the factory ceased production. The company later made more normal mopeds as well as motorised tandems. Since the early 1950s, Motul was the preferred lubrication partner of Derny. This specific example was being used during races and, because cycling became a more and more popular sport, the Derny received a full Motul livery, giving our brand, in this period good publicity. It was kept in use during cycling races until 1985. 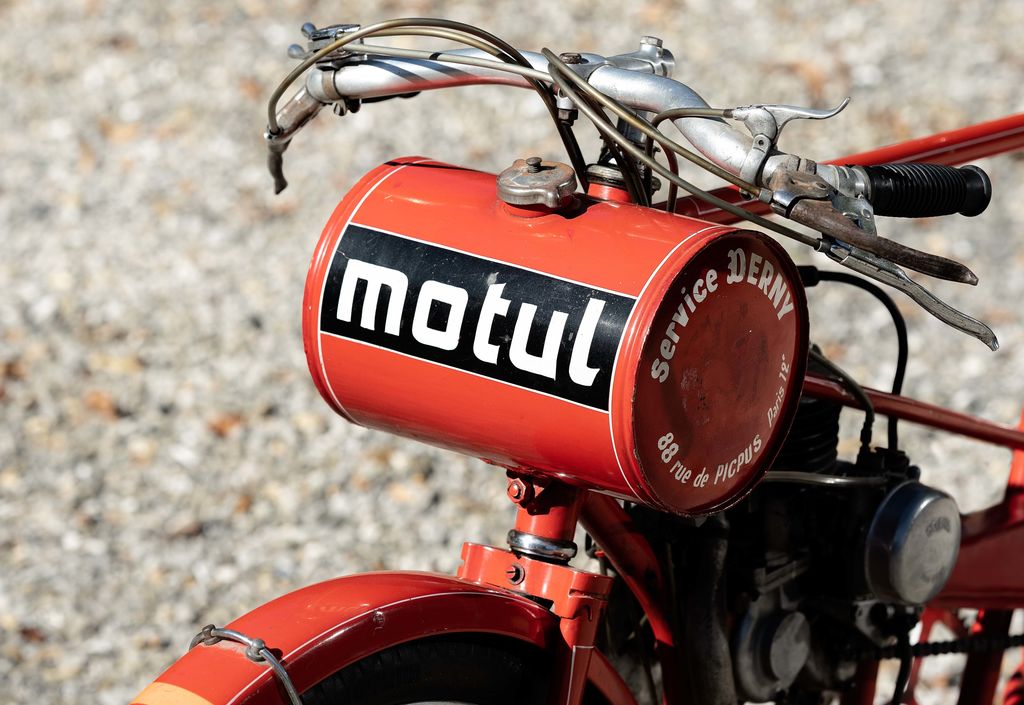 This version is nicely preserved. How was Motul involved?

We were able to buy this specific model about two years ago. We estimate the production year date somewhere between 1948 and 1952. It is part of our French racing heritage, so we’re very keen to have retraced ‘our Derny’. It is currently being shown in the Chateau de Compiègne near Paris, France, at the expo Vitesse, which is open from 10th of December to the 21st of March 2022. 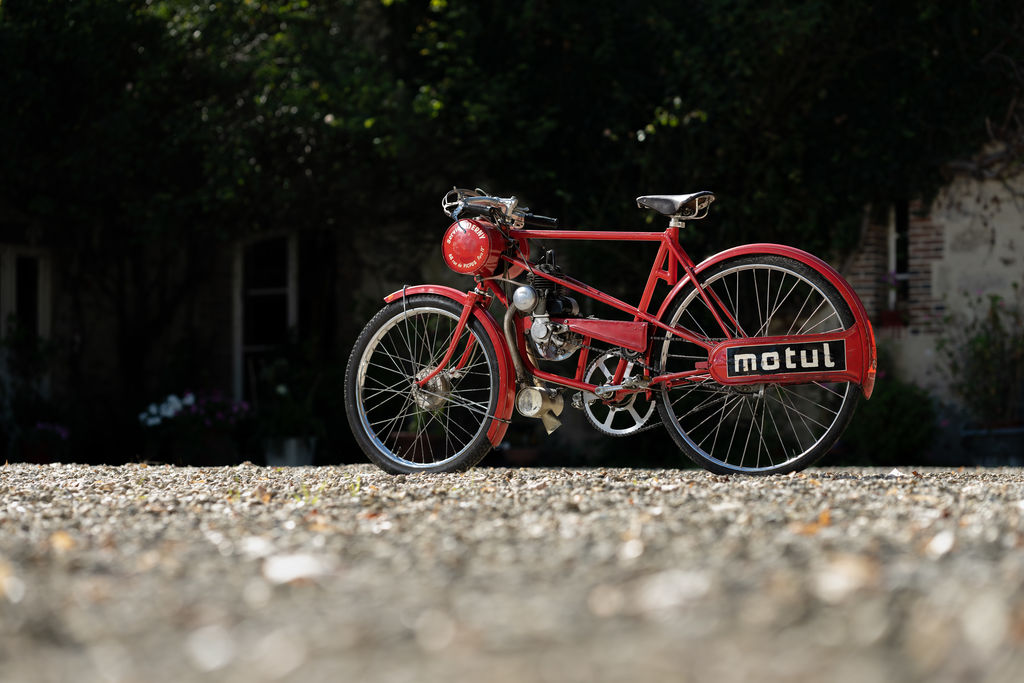