For several years, Motul has been a proud partner of the French association 'Fondation du Patrimoine'. It is a non-profit organisation with the sole objective of preserving and restoring French heritage, varying from buildings and objects, to complete cars and motorcycles. It is for the latter two that Motul is supporting the organisation, and together they organised the 'Grand Prix’ competition, rewarding the two most valuable restorations of French heritage vehicles. Earlier this month the two winners of 2021 were announced. We caught up with Romain Grabowski, head of brand at Motul, about the Grand Prix winners. 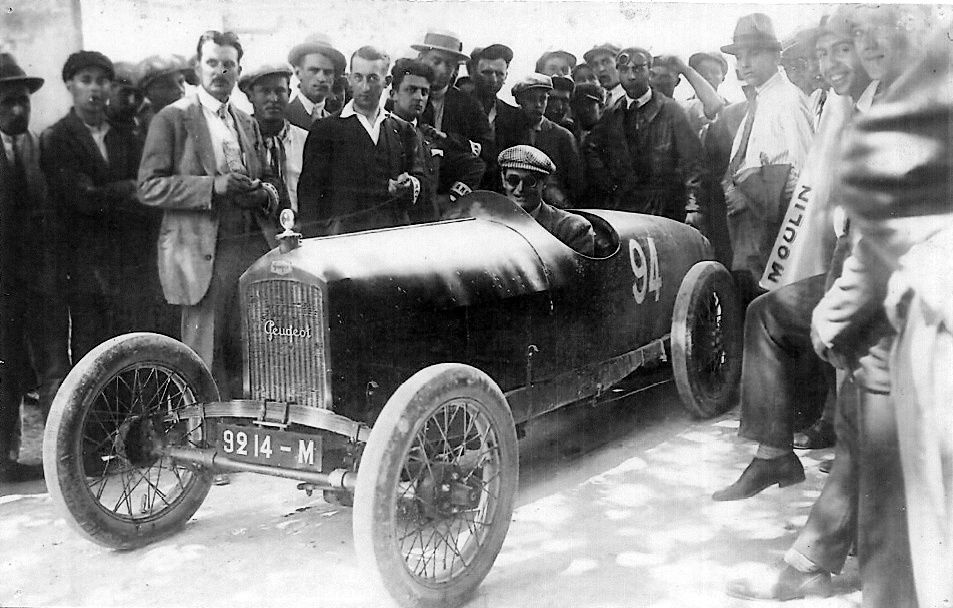 Romain, who took the first prizes in this concours? 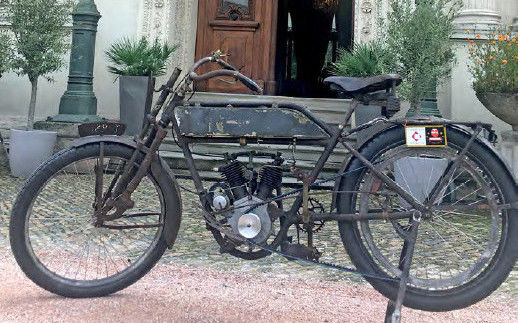 Why is Motul collaborating with the Fondation du Patrimoine?

The Fondation du Patrimoine, thanks to its partnership with Motul, has been providing financial support since 2008 to projects aimed at safeguarding and enhancing the rolling motorised French heritage, which occupies an important place in the public's heart. This action, which has already contributed to the financing of over 60 restoration projects of remarkable vehicles, contributes to the maintenance of numerous professions of excellence in which France possesses a recognized know-how. Eager to invest more in the preservation of motorised heritage, the Fondation du Patrimoine and Motul have jointly launched the 'Motul - Fondation du Patrimoine Grand Prix' for the preservation of car and motorcycle heritage, endowed with a minimum of €30,000 (€20,000 for cars, €10,000 for motorcycles). 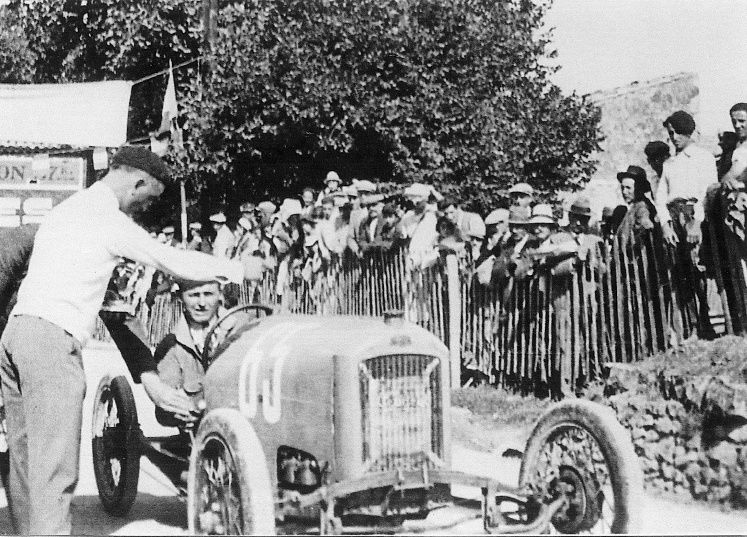 What's the story behind the Peugeot Quadrilette?

After having disappeared for 40 years, this Peugeot Quadrilette, which has a well-known record of achievements up to 1932, was found in 1973 by the Michel brothers, who reconstructed its history. It now belongs to Sébastien Berthebaud, the President of the Form/Ulting training centre in Savenay (Loire-Atlantique), where it is currently stored. The restoration work, which began in January and will last three years, will involve the restoration of the racing engine, the chassis, dismantling and reassembly of the bodywork and all the mechanics, including the specific braking system. Alongside the Citroën Ami 6 "Pop Art", the Quadrilette will be used as a support vehicle for young people who dropped out of school, as part of the "Getting back on the road" reintegration project, in partnership with the association 'L'Étape' from Nantes. 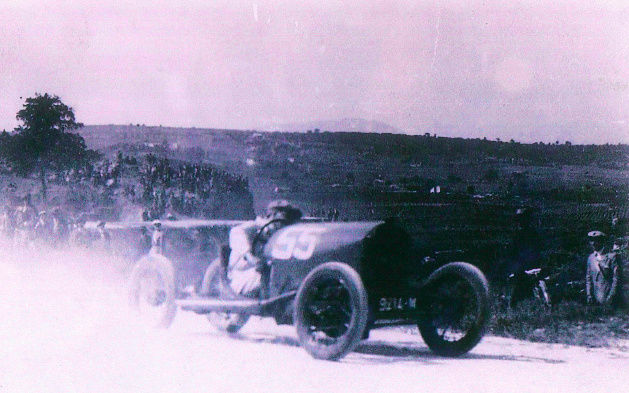 What will happen with the car once it's been restored?

After restoration, the vehicle will participate in shows, events and exhibitions. By the way, the total cost of the work to restore the Quadrilette is estimated at a staggering €81,500! So it really deserves a special place. The vehicle is currently parked at the Form/Ulting training centre, the first training centre for vintage vehicles and youngtimers. It will be presented on several shows (Epoqu'Auto, Historic-Auto, etc… ) and events (such as Vintage Revival Montlhéry) in which the training centre will participate. It could also be exhibited in temporary exhibitions at the Peugeot Museum in Sochaux. The vehicle will also be used as a support for training courses: aluminium sheet metal forming, pre-war carburettors, and magneto. 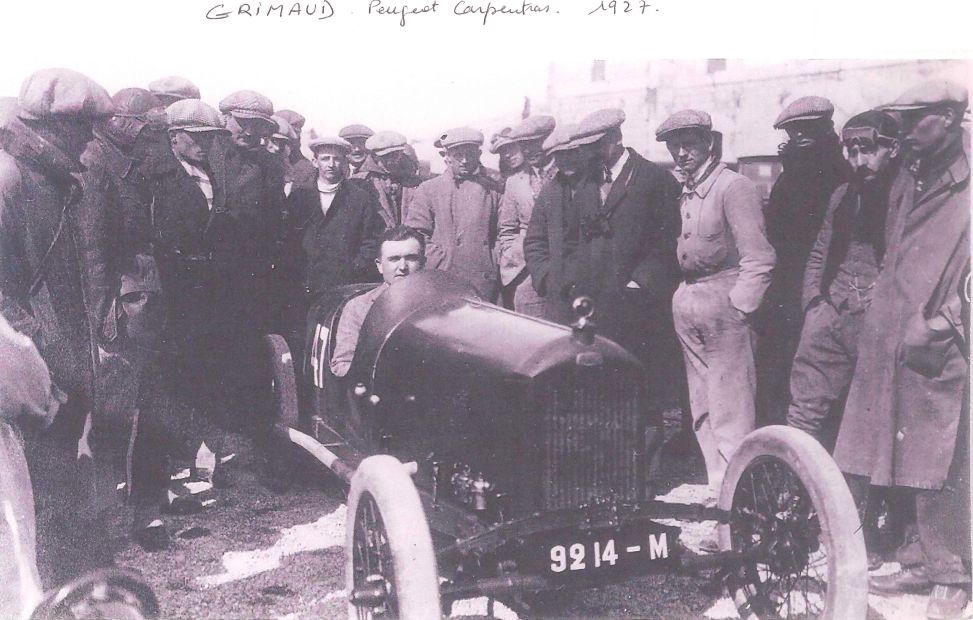 What makes the car so special?

The Quadrilette 161 Tandem is a narrow gauge vehicle whose registration 9214-M refers to the Quadrilette 161 n° 1620 registered on December 12, 1919 in Lyon. The number has now disappeared but it bears the traces of the various modifications made during the competition. The car was bought second hand on January 6th, 1927 by the Garage Grimaud - a Peugeot dealer in Carpentras. The garage made some modifications to turn it into a racing car for the 750cc category with an extended front end in the typical colour 'French aviation blue'. 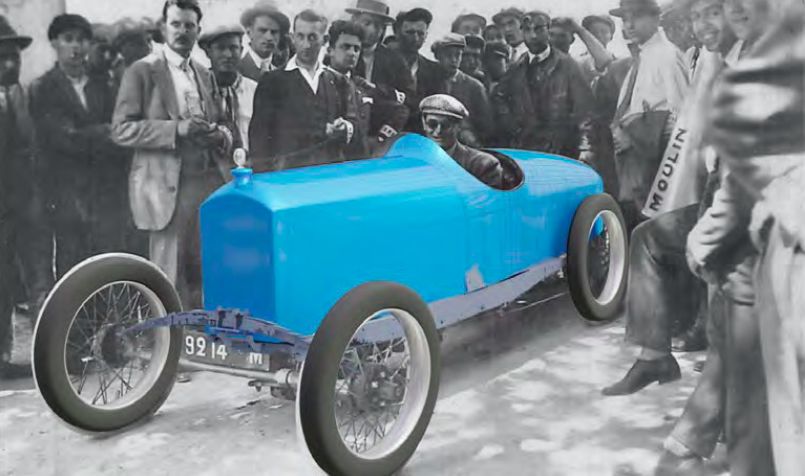 What about the Griffon motorcycle, which won the motorcycle prize?

The 1913 GRIFFON 3 motorcycle is a light, two-cylinder motorcycle, with automatic valves, whose engine is identical to the Peugeot "Paris-Nice" type. It is presumed that it was requisitioned during the First World War by the French army, which mobilised civilian vehicles, some of which, such as this motorcycle, were repainted in grey, thus erasing all marks and distinctive patterns. Its patrimonial interest lies in its rarity and its age. The owner Richard Fabre wishes to restore the motorcycle to its original condition. 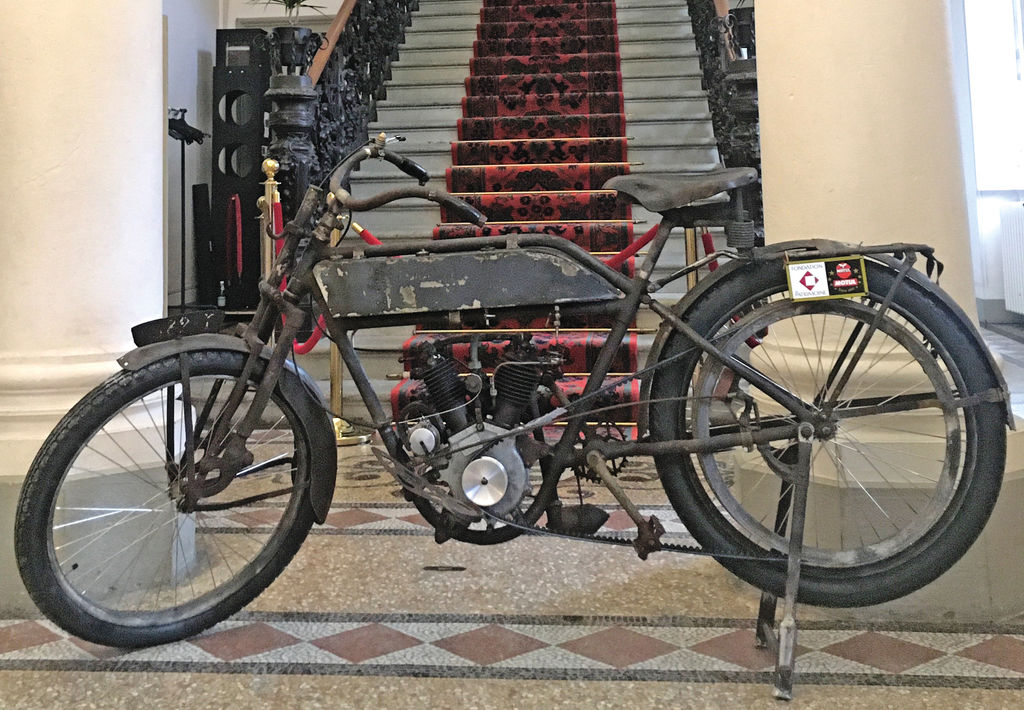 How will the restoration evolve?

Currently the bike is stored in Toulouse, and it requires eight months of extensive bodywork, mechanics and tyres for its restoration. It will be presented in various heritage events in Haute-Garonne or in the Tarn, during the gathering of vintage and exceptional cars and motorcycles. 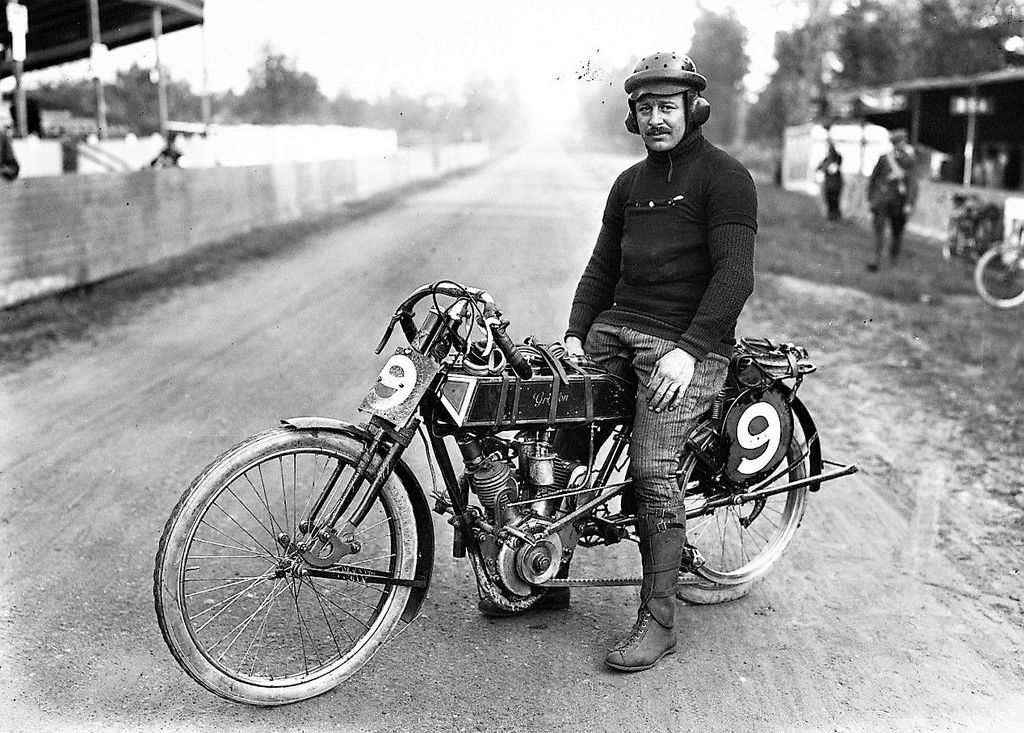 The brand 'Griffon' will not ring a bell in many people's minds?

No indeed, the Cycle company Griffon was a former French manufacturer of bicycles and motorised two-wheelers. After the First World War, in 1919, Griffon became part of the consortium "La Sportive", a grouping of the French brands Peugeot, Hurtu, Alcyon, Automoto, Griffon, Liberator, Labor, La Française, Gladiator, Clément, Armor and Thomann. In 1929, the Griffon brand was taken over by the FMC Company "France Motor Cycles". 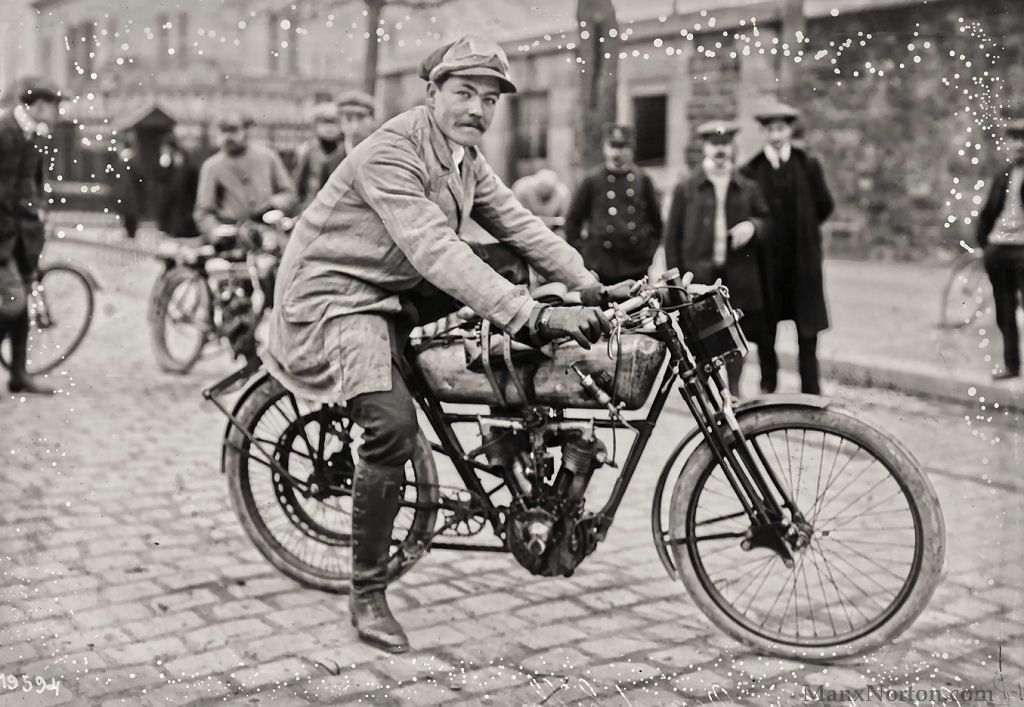 What work needs to be done?

An accident has heavily damaged the frame, rear fender, luggage rack, rear rim, handlebars and kickstand. Important sheet metal work required the manufacturing of specific tools was carried out in order to preserve a maximum of original parts. Concerning the engine, it was unlocked and all the moving parts were rebuilt. The magneto, a Bosh DA 1V Type 45°, was missing at the purchase. It was printed with a 3D printer, allowing to rebuild the magneto entirely. The missing drive pulley on the crankshaft was made on the lathe according to the original plans. 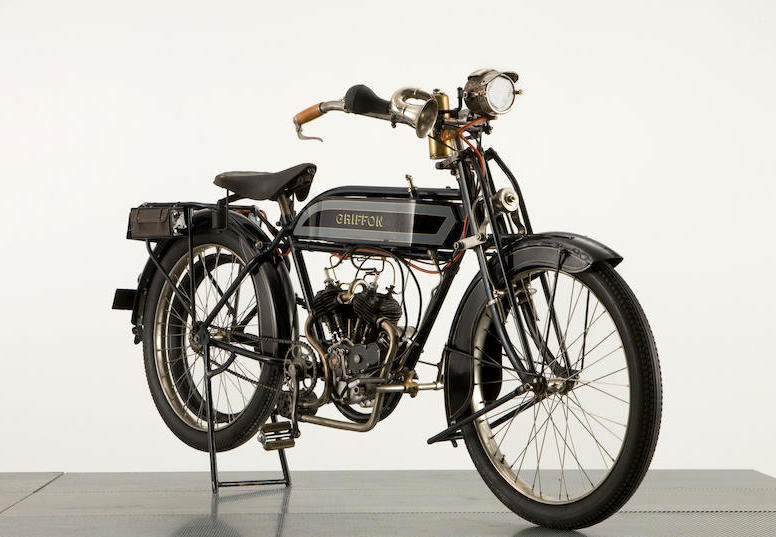