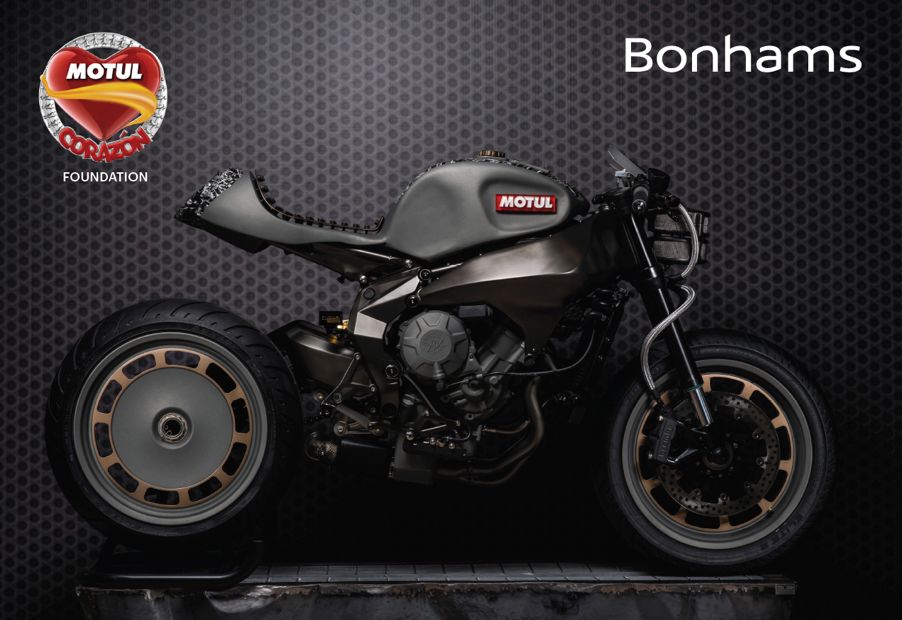 Motul is auctioning the Motul Onirika 2853 in conjunction with Bonhams in Paris on 9th February. All proceeds from the sale will go to the Motul Corazón Foundation and will fund future projects.

Driven forward by men and women sharing values such as “Brotherly”, Motul has always put people at the heart of its strategy. Moreover, Motul is consistently looking towards both the future and innovation.

Motivated by this ideology, Motul has decided to sell its Motul Onirika 2853 as lot 214 at Bonhams’ Grand Marques du Monde sale at the Grand Palais at 9:00 am 9th February. The company will donate all proceeds to its socially responsible foundation, the Motul Corazón Foundation, which was officially launched in 2011 under the aegis of Fondation de France. Sponsoring projects all over the world, Foundation President Michel Rivoire has emphasized “The Motul Corazón Foundation has chosen to help disadvantaged adolescents on all continents to train themselves in mechanical and technical fields, where they can passionately build their professional future”.

Inspired by countless details, quotes, art forms and technologies, the Motul Onirika 2853 is an artwork created by Italian design house Officine GP Design’s Luca Pozzato. Although currently an art installation, it has the potential to be transformed into a running motorcycle. The name Onirika means “dreamlike” while the 2853 refers to a thousand years after the company’s founding date.

The Motul Onirika 2853 is a harmonious mix of stimuli from the different sectors in which Motul is present. Developed using bespoke manufactured parts, the bike features a handcrafted aluminium fuel tank using gears as a theme and was coated using a ‘cubic paint’ technique. Its cast iron grey colour, the gear-shaped fuel cap and the rich detailed textures are all references to Motul’s universe.

First presented at the Verona Motorbike Expo back in January of last year, Onirika has stunned audiences throughout 2016 at events such the WorldSBK in Imola, at the French Motorcycle Grand Prix, Wheels and Waves, the 24h of Le Mans, the TT Assen Motorcycle Grand Prix, and Intermot. Its roadshow will end with the Grand Palais auction in February, where its new journey will begin.