Sam Christmas is a UK-based motorcycle photographer who has attracted a strong following for his laid-back, documentary style. He’s shot for brands and magazines, but some of his most notable work has been exploring the custom bike scene as well as capturing Guy Martin like he’s never been shot before. This is his story… 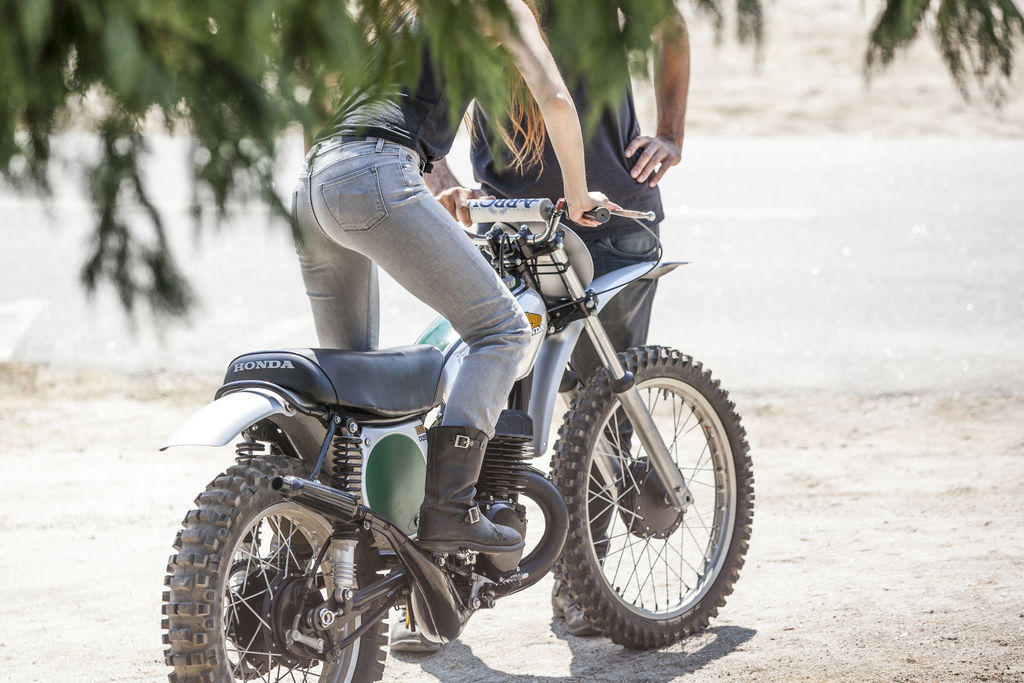 Sam, how did you get into bike photography?

I was working mainly as a portrait photographer, shooting celebs, actors and musicians for magazines like GQ and Tatler. When I was 31, I decided to take my motorbike licence. It’s something I’d been wanting to do since I was a kid. And from that point I became obsessed with bikes. Shortly after I got commissioned to go to the Isle of Man TT. I was there with a well-connected bike journalist who introduced me to loads of people and I started working for his magazine Sideburn. 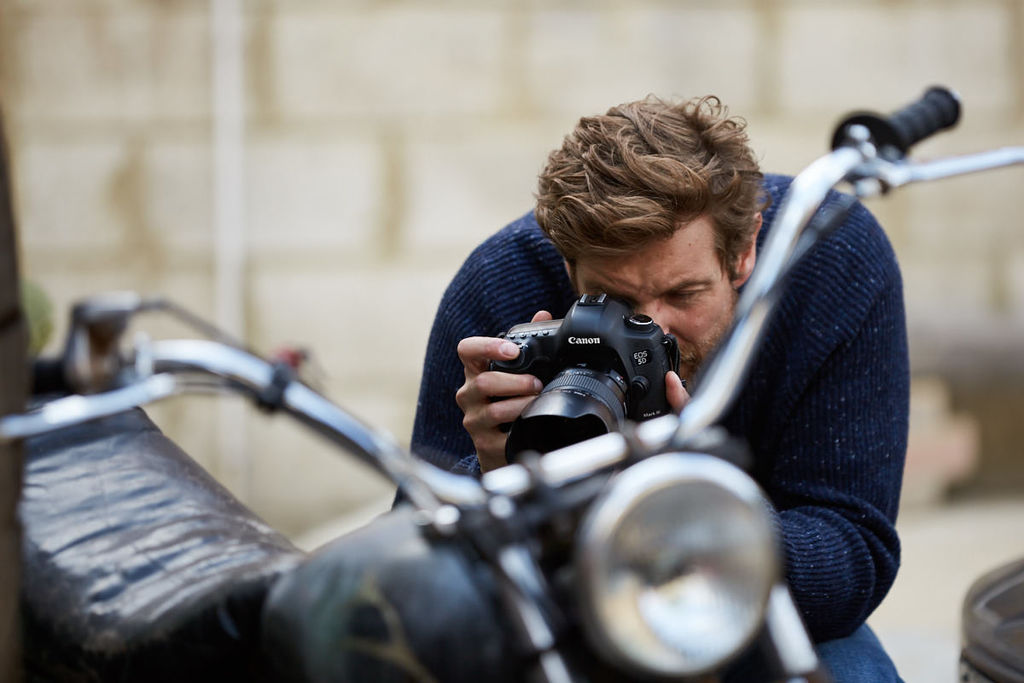 You specialise in the custom motorcycle scene. Tell us about that

I started shooting bikes at the start of a growing scene of younger people who were customising motorcycles. This underground scene of really interesting people making interesting bikes. I found the characters and the bikes so curious photographically, and I started documenting it. It felt like a natural thing to do. I started doing portraits of people in their garages, working on the bikes, and made that into an exhibition called Natural Habitats, and that got a lot of traction and I started getting a few bike commissions. 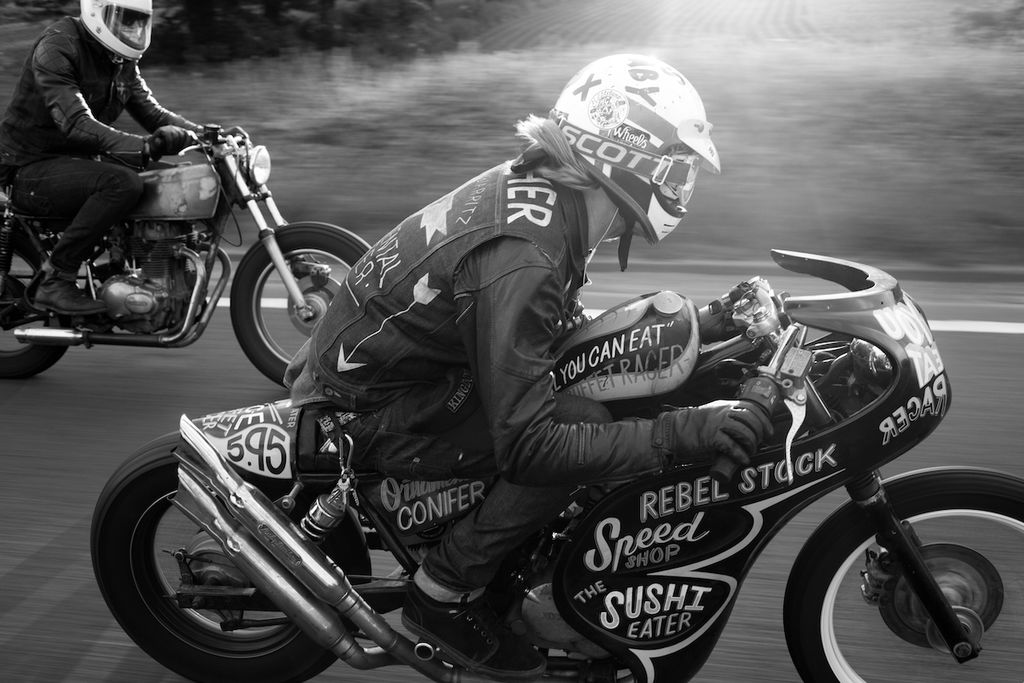 You’ve got quite a documentary style that suits that scene?

When I was doing my portraits, I came from a technical background with elaborate set ups, a lot of lighting and controlled sets. When I did the Edwin stuff (at Wheels and Waves in Biarritz) it was a watershed moment because I couldn’t take any equipment on the bike on the trip there. I’d only one lens, and I shot the whole thing in a very loose style and captured it in a documentary-like and authentic way. And because I was using a long lens, I could get lots of natural moments while keeping my distance. It was almost like the camera was invisible. That shoot changed the way I photographed forever: capturing those real moments and the spirit of what riding is about. 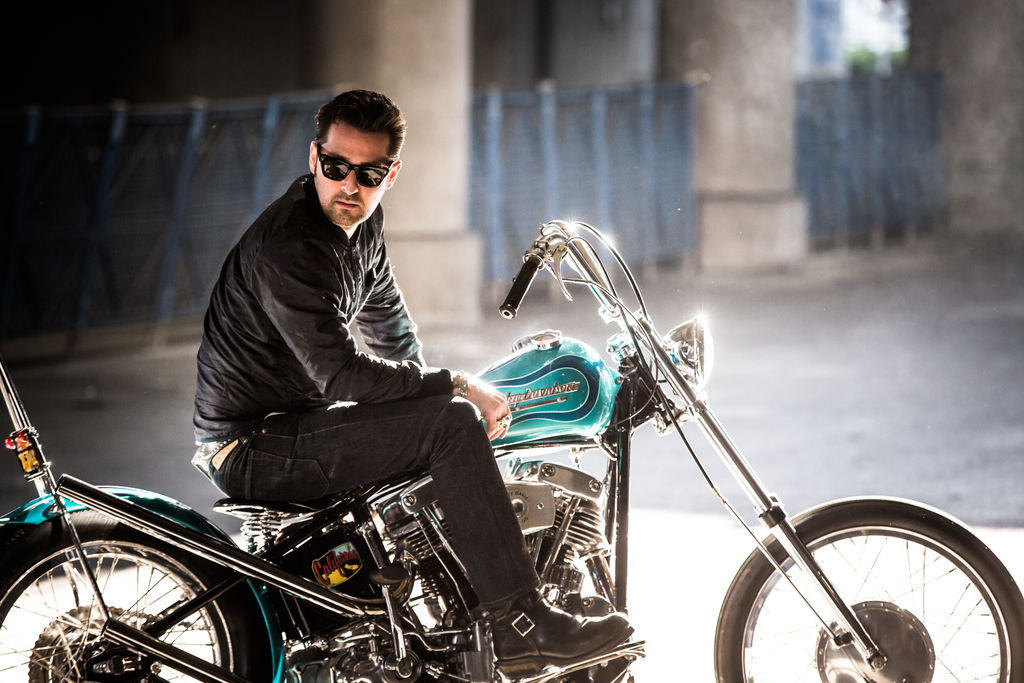 A writer friend of mine and I travelled out to capture Guy Martin’s Pikes Peak run. It was quite an event trying to get there. A non-stop 30-hour journey. We arrived at 2am, three hours late, and picked up a couple of 250cc bikes and rode through the night. We eventually found the road to Pikes Peak and ended up riding the course in the dark, with no idea where we were going or that there were huge drops to the side of us. The altitude was so high the bikes weren’t working well either. And we arrived just as Guy was putting on his leathers to set off on his practice run. Pikes Peak is a logistical nightmare to shoot. You’ve got to pick one place and you’re there for the day. You sit there and hear the bikes coming, but you can’t see them, and there’s no set order, so I had no idea which one was Guy. So, I had to be ready for every bike that came past. And then just at the right moment, as the sun was coming up, he came past and I got the perfect shot. The next day I got him crossing the finish line in the race. The key shot for me was when he got off his bike and had a quiet moment to himself looking out over the valley below. 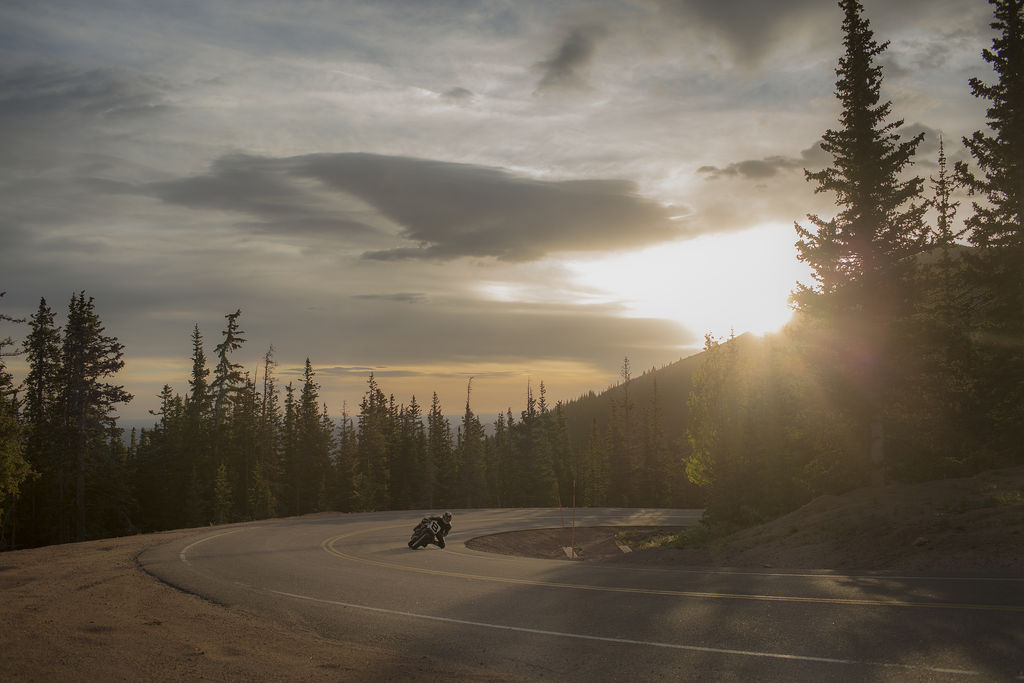 And you’ve worked with him since?

I shot two of his book covers. He’s a great guy to work with and I think he appreciated that I gave him some time after his Pikes Peak run to compose himself rather than dashing over and shoving a camera in his face. 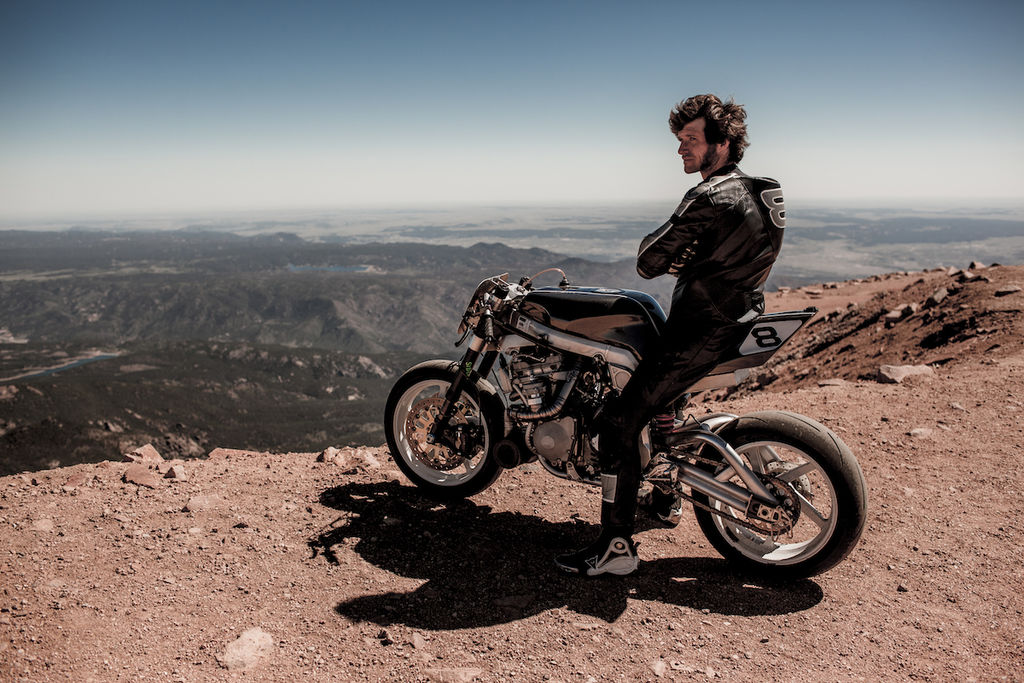 Tell us about the story behind your evocative picture of Guy at the IoM TT?

I got quite a classic shot of Guy at the TT. It was the one image I had in my mind that I really wanted to capture: the intensity of that moment when the riders flick the switch and go into race mode as they’re about to set off on the most dangerous race on earth. Normally, they’re so relaxed, but I assumed there was a moment when that changed, and I wanted to shoot it. I was hanging around Guy before he set off and at the very last moment, I managed to get a really tight shot of him on his bike as he stared intently down the road just seconds before he set off. 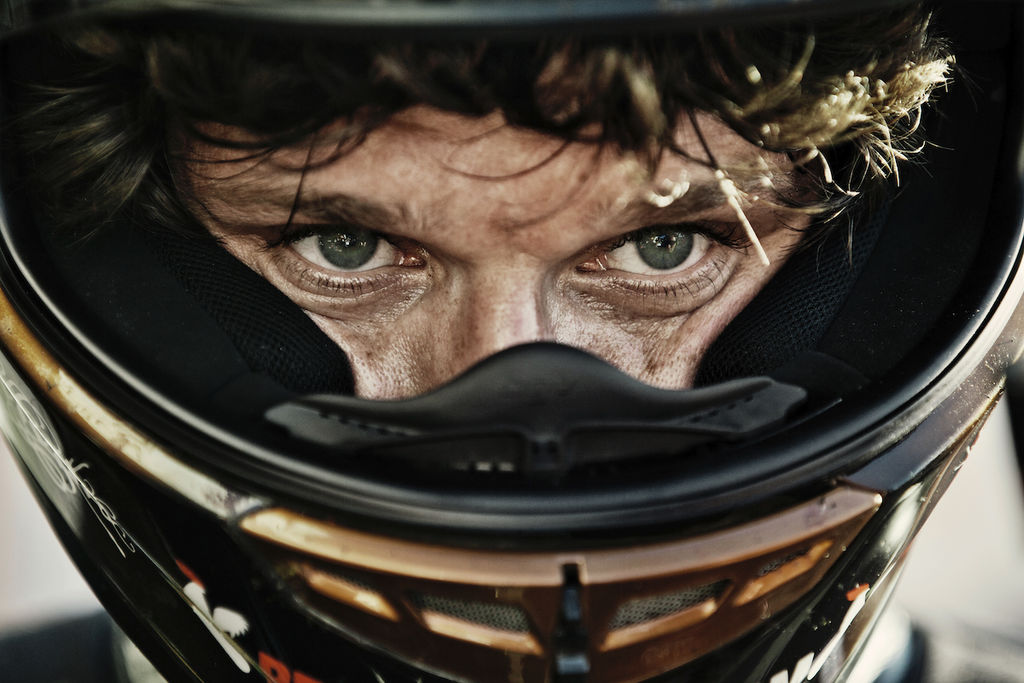 What bikes do you own?

I’ve got a Ducati 848 Evo which is a beautiful, modern sportsbike. If you look at it from above, it’s meant to resemble a lady’s form [laughs]. I’ve also got a Suzuki GSXR 600, the 2001 model, which I think is a modern classic. I’ve also got a ’77 Suzuki GS750 which I started customising but ran out of time when I started having kids. Another bike I’ve owned but now sold was a Suzuki DRZ400, which I converted to a flat-tracker and raced for a season until I was injured. 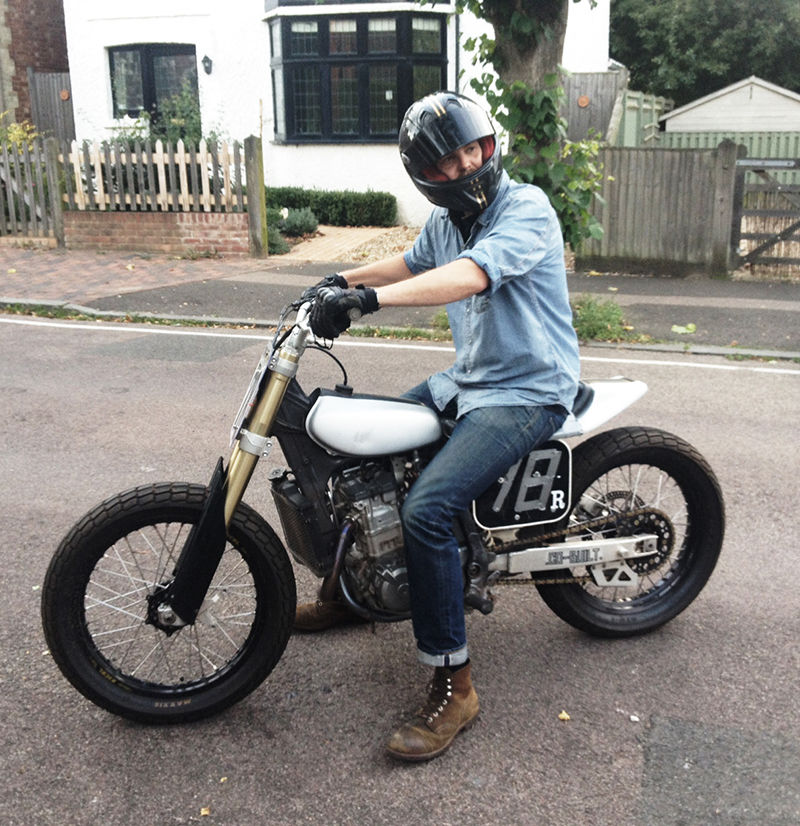